KTRK
HOUSTON (KTRK) -- First it was the flood, now it is the fires. After a pair of Meyerland-area homes that were flooded last month were damaged or destroyed by fire this month, flood victims are worried they could be next.

Within days of the Memorial day flood, a Meyerland house caught fire. Now it's happened again and those who saw the first disaster are wondering how to keep this from happening to them.

"We had power to the whole house but now only half of the home has electricity so something's not right," said Colleen Gray whose Meyerland home flooded on Memorial Day.

Since then, she's seen two area homes hit by fire, and with electrical problems inside her own home, she's worried.

"Everybody is asking me, stopping by and saying what are you going to do ... I am scared to death of anything like that," said Gray.

Her son-in-law Dan Sharp is worried too.

Sharp says work on the home is at a stand still, but when it resumes, they will get a certified electrician to figure out if Gray's home is at risk from a fire.

"The first thing we are going to address is the power; it's got to be done," said Sharp.

The potential for fire after a flood can be traced to the wires, circuit panels, switches and outlets that were submerged in water.

Electricians say those things need to be thoroughly checked out before rebuilding begins and replaced if needed.

It's a big enough concern that the Meyerland Neighborhood Association is warning homeowners to have their electrical systems checked by a professional.

"Even though the sheet rock has been removed, the water can still be in the devices and be in the wire depending on how high the water has gone," said David Floyd of John Moore Services.

Another potential trouble spot? Work crews ripping out damaged dry wall could accidentally cut wires which could cause a fire after the rebuilding has finished.
Related topics:
home & gardenmeyerlandfloodinghouse fireaction 13
Copyright © 2020 KTRK-TV. All Rights Reserved.
RELATED 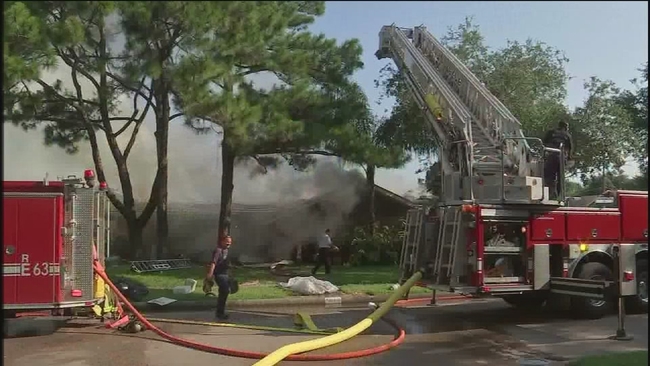