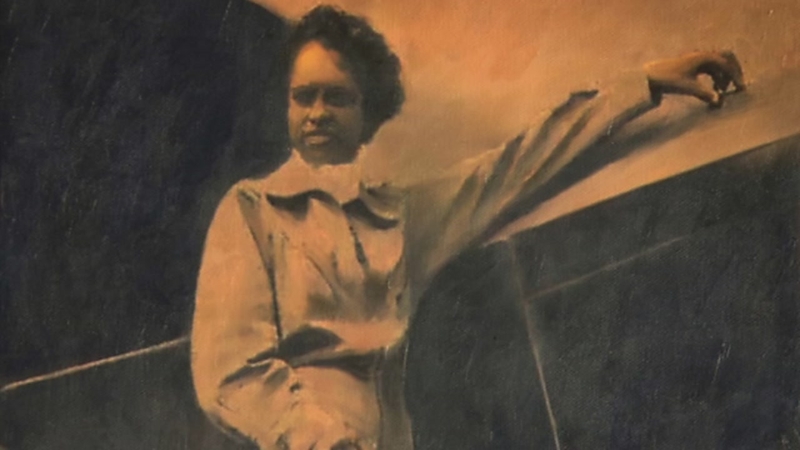 HOUSTON, Texas (KTRK) -- She's a remarkable woman who made history in Texas by literally soaring above the barriers of race and gender.

Azellia White is still making history - at the astounding age of 105 years old. ABC13's Melanie Lawson asked her about her secret to living such a long life.

White told Eyewitness News she doesn't smoke or drink, which she feels has helped her over the years.

But this isn't about her amazingly long life, it's about how she's lived it. Born in Gonzales, Texas, she married Hulon White in 1936, better known as "Pappy." They moved to Tuskegee, Alabama five years later, where Pappy worked as a mechanic with the famed Tuskegee Airmen.

When asked, "What made you decide you wanted to fly?" White said, "My husband was a pilot and I learned to fly from him."

Some of the airmen also took her under their wing - no pun intended - and taught her some of the nuances of flying.

"There weren't too many black people flying," she said. "And I said, 'I can learn to fly,' and I learned to fly. It was easy."

Her inspiration was first lady Eleanor Roosevelt, who visited the air base in 1941 and persuaded her husband to deploy the black pilots in World War II. White still marvels at that visit today, more than 70 years later.

"Mrs. Roosevelt helped us. She said, 'I'm going back and tell them to let those black guys fly,' and she did it and we took over."

When the war ended, the Whites moved back to Houston and opened up their own school to teach other African-Americans to fly. And the couple spent a lot of time flying their own Taylorcraft two-seater. White's great-niece, Emeldia Bailey, says her aunt loved to fly from the very beginning.

"She says you just felt free up there, just free. There weren't any racial barriers or things like that when you're in the skies. That's right," Bailey said.

She got her pilot's license in 1946, the first black woman in Texas to do so. Their pilot school closed that same year, but left a major influence.

Her godson James Miller, who's also a pilot, says, "There's such a thing as being a trailblazer. There are very few black female trailblazers in aviation."

After she was inducted into the Texas Aviation Hall of Fame, HISD named the Aviation Science Lab at Sterling High School in her honor.

She's received many other awards for her groundbreaking decision to fly. We were there when the Houston Area Urban League Guild honored her.

President Michelle Levi told her, "You have inspired all of us." She went on to say, "She just wanted to fly, but she had no idea the impact she was making on other people."

Guild member Tony Provall agreed, saying, "She's the epitome to me of everything that is possible when you put your mind to it."

But for White, it's simple.

"I just had a good time in life," she said.
Report a correction or typo
Copyright © 2021 KTRK-TV. All Rights Reserved.
More Videos
From CNN Newsource affiliates
TOP STORIES