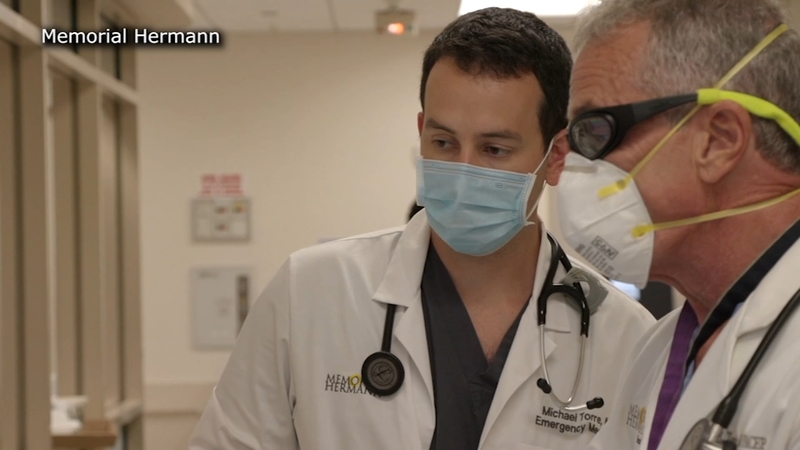 HOUSTON, Texas (KTRK) -- A father-son duo is helping save patients in a Houston emergency room.

"I planned this five years ago, and it came to fruition," said Dr. Paul Torre, an ER physician with Memorial Hermann.

Paul and his son Dr. Michael Torre are emergency medicine doctors at the hospital.

Paul has been in the ER almost 33 years, and his son is on year two.

"I've learned a lot, and feeling a little more comfortable in my shoes. You learn something on every shift," said Michael.

On one particular shift, the pair got to work side-by-side for the very first time.

The two worked to stabilize, save and treat critical patients in tandem for two days.

As the pandemic rages continues at an uncontrolled spread in Houston, their relationship has helped calm fears while comforting patients and their families.

"I told her, 'You don't have to worry. Your husband is being cared for by one of the greatest doctors I know, it's my son,'" said Paul reflecting on several cases during their shift together.

They joked about some father-son hierarchy banter, but also praise and mentorship.

"He dropped some knowledge. Just a couple of patients. Like I said every shift you try to learn," said Michael.

As they get compared to other famous father-son duos, these two are like unsung superheroes with white capes. Following their passion to save lives.

"Once I realized I am going into emergency medicine, I thought it would be cool to one day be in the same field, doing the same thing. It happened," said Michael.

Both are admittedly adrenaline junkies with a personality for a fast-paced ER, love their chosen careers, but the elder Dr. Torre says, "when you can do it with somebody that you love, what a deal!"