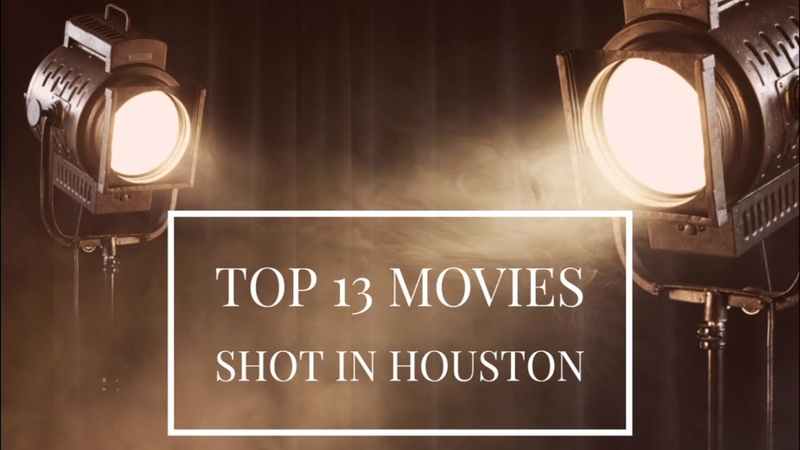 HOUSTON (KTRK) -- While all eyes are on Hollywood ahead of Oscar night, Hollywood has long set its sights on Houston as a shooting location for the movies.

From a futuristic space city to a lush countryside, to gorgeous shores and NASA, the Bayou City is as versatile as some of the world's best actors, playing itself and other locations on the silver screen.

Here are 13 of our favorite flicks shot right here in Houston:

"Boyhood" (2014)
The Richard Linklater epic shot over a 12-year period features scenes on the University of Houston main campus, in addition to the George R. Brown Convention Center.

"Terms of Endearment" (1983)
If you live in Houston, you know this movie. Debra Winger, Shirley MacClaine, and Jack Nicholson star in a dramedy about love and slightly dysfunctional family members.

Houston plays a prominent role, with scenes filmed in the River Oaks, at a home on Locke Lane (where Aurora lived), at a garage apartment on Heights Boulevard (where Emma and Flap lived), and at Brennan's restaurant, where Aurora and ex-astronaut Garrett Breedlove dined.

"Reality Bites" (1994)
This coming of age film is a favorite of any Houstonian who grew up in the 90s. Winona Ryder and Ethan Hawke shined in this film about love, work and life after college. It's a gem of a film.

The cast and crew spent 42 days here during production, crossing town from The Heights to Tranquility Park downtown, to Lelaina and Vickie's apartment on West Clay Street in Montrose.

"Rushmore" (1998)
We love Wes Anderson, and his flick about adorably weird Max Fischer's flirtation with a teacher and academic expulsion is one of our favorites. Jason Schwartzman and Bill Murray give some of the most memorable performances of any Houston-made movie in "Rushmore. "

"Urban Cowboy" (1980)
John Travolta painted the town red in James Bridges' film about a young cowboy who learns about life and love in a big city bar. Pasadena and Deer Park residents got up close and person with the stars, and Gilley's nightclub was a star in the film itself.

"Pearl Harbor" (2001)
The movie about that date which will live in infamy -- the day Pearl Harbor was attacked -- includes scenes shot on the Battleship Texas. The one warship played both aircraft carrier "Hornet" and battleship "West Virginia," which is where Cuba Gooding, Jr's character Doris 'Cookie' Miller was stationed.

We'd be remiss if we didn't mention that an ABC13 news truck can be seen parked outside Jim Lovell's residence in the movie "Apollo 13." That's a great scene, but the ones featuring Tom Hanks, Bill Paxton and Kevin Bacon are better.

"Logan's Run" (1976)
Michael York and Corpus Christi native Farrah Fawcett starred in a better-than-decent sci-fi flick about a future in which everyone must die when they reach 30 years old. The Hyatt Regency Hotel on Louisiana Avenue makes an appearance in the film, set in the year 2274.

"Tree of Life" (2011)
The film starring Brad Pitt and Sean Penn was produced completely in Texas, and that includes an office at 1100 Louisiana Street in downtown Houston, where character Jack works as an architect.

"Tin Cup" (1996)
If you lived anywhere on the north side in the late 90s, all people could talk about was getting a glimpse of Kevin Costner or Rene Russo. The golf movie was set in North Carolina, but filmed at Kingwood Country Club for much of the film.

"RoboCop 2" (1990)
Okay, we'll admit it: The sequel about the cyborg law enforcer RoboCop isn't the finest film ever made. But, you have to appreciate all the Houston landmarks and buildings that doubled for Detroit, and there are a lot of them:

BONUS: Two movies (probably) not filmed in Houston
For as many movies as there were filmed in the Bayou City (more than a thousand in all, according to IMDB), Houston Film Commission Executive Director Rick Ferguson says there are two that weren't but people think they are: "Selena" and "The Martian".

On the biographical picture about Mexican-American superstar Selena Quintanilla, Ferguson says he worked with the filmmakers during pre-production. But (brace yourselves), the famous Astrodome concert scene at RodeoHouston was actually filmed in San Antonio's Alamodome.

"The Martian," meantime, seems like it would have been made at NASA. But, it probably wasn't.

"We would have loved both of them to have been filmed in Houston," Ferguson said. "But, not to my knowledge, they weren't, at least not first unit."