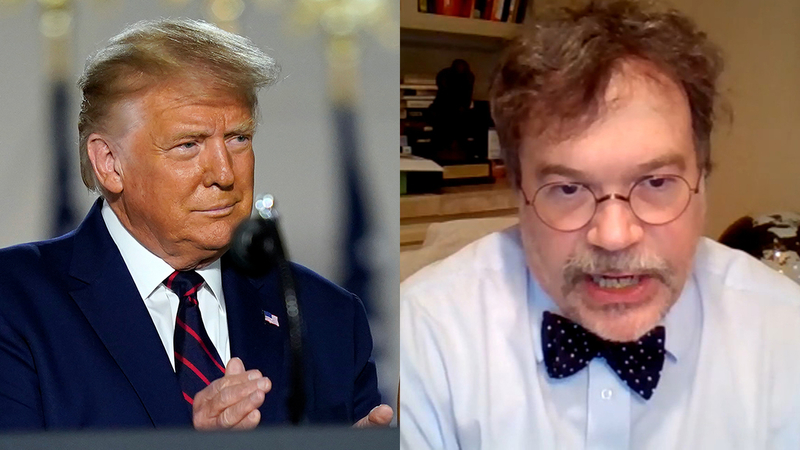 HOUSTON, Texas (KTRK) -- One of Houston's experts on vaccines and the coronavirus believes President Donald Trump should be in a hospital after his positive test for COVID-19.

"I don't know that monitoring him and following him in the White House is the best path right now and I think over the next 24 hours, we'll need to consider whether or not to have him admitted to Walter Reed (Medical Center) where he could be followed a little bit more closely," said Dr. Peter Hotez, Dean of the National School of Tropical Medicine at Baylor College of Medicine.

In addition to President Trump's age and weight, Hotez says the fact the president is symptomatic is also a concern.

"Now that we're hearing he's symptomatic, somebody like that, you know that's somebody you might consider admitting to the hospital for observation and monitoring because we know oxygen desaturation can occur even without shortness of breath," said Hotez.
Trump is experiencing "mild symptoms" of COVID-19. The president announced early Friday that he and first lady Melania Trump tested positive. A White House official said Friday morning that the president was experiencing mild symptoms but was working from the White House residence.

The White House physician said the president was expected to continue carrying out his duties "without disruption" while recovering.

"Remember, this is the president of the United States and if he gets severely ill, especially a month before the election, that's a major national security issue," Hotez said. "These are all things that need to weigh into this and there's not a lot of threshold for error and that's why I'm an advocate to have him admitted for closer monitoring and observation if he really is starting to get sick."

The White House Medical Unit provides medical care to the president, vice president, their families and international dignitaries who visit the White House and is directed by Chief White House Physician Sean Conley. The staff operates similar an urgent care center inside the complex, according to past reports. The staff also travels with the president and has facilities on board Air Force One.

When the White House Medical Unit doesn't care for heads of state, they are often treated at Walter Reed National Military Medical Center in Bethesda, Maryland. Trump has been there before as a visitor and as a patient in 2019.

Trump made an unannounced visit to Walter Reed in November, spending a little more than two hours undergoing health exams as part of his physical, a trip that was notably secretive, though.

In the memo about Trump's physical released in June, the White House physician said Trump underwent additional tests at the White House after the initial visit to Walter Reed.