What is a brain aneurysm? Signs, symptoms and treatment to know

KTRK
As rapper and hip-hop mogul Dr. Dre recovers from a brain aneurysm, there have been more than two million searches on him and the topic of aneurysms.

Dr. Dre, born Andre Young, suffered the aneurysm on Monday. The Los Angeles Times reported that the 55-year-old was in an intensive care unit at one point and was later in stable condition after undergoing testing Tuesday.

Dr. Dre has not shared why he was hospitalized. But he did post on Instagram that he's "doing great and getting excellent care" after being hospitalized in Los Angeles.

Still, the health scare has brought up more questions about brain aneurysms, the cause and symptoms.

What are brain aneurysms?

A brain aneurysm is an area of weakness in a brain blood vessel that can grow larger and thinner over time, Baylor College of Medicine describes.

If it ruptures and bleeds, it can release blood around the brain and be damaging.

What causes brain aneurysms and what are the symptoms?

The general population risk of having an aneurysm is about 2%.

According to Dr. Spiros Blackburn, a neurosurgeon with UTHealth Neurosciences, aneurysms tend to be small, less than one centimeter. Those typically don't cause any symptoms, unless they bleed.

If an aneurysm ruptures, symptoms to look out for can include nausea and vomiting, sudden severe headache, loss of consciousness, and sensitivity to light. If pressure in the brain becomes too high from the bleeding, it can be deadly, Blackburn said.

Go immediately to the emergency room if you're experiencing this.

What happens after an aneurysm is discovered?

The most important step will be to stabilize the patient and may require an emergent drain in the brain to relieve some pressure and bring the pressure of the brain back to normal.

"That can be lifesaving in the first few hours," Blackburn explains.

But the next 24 hours are also critical. That's where doctors have to identify where the aneurysm is and how best to treat it. When it comes to Dr. Dre's case, Blackburn said it sounds like the rapper has at least made it through phase 2.

Under phase 3, Blackburn explains, the patient will be monitored for at least seven to 14 days to ensure the bleeding caused by the aneurysm doesn't cause any new problems even after the aneurysm is repaired.

"Even blood around the brain is very irritating, and can even cause strokes, seven or 10 days after the bleeding," Blackburn said.

How do you treat a brain aneurysm?

Blackburn says there are two main ways, adding that about 70 to 75% of brain aneurysms are treated endovascularly, meaning you go in with a catheter through the groin.

"Just like cardiologists put in heart stents, we go up into the brain vessels, and we put in little bitty coils, and we fill that little blister sack with some coils. So as it fills up, the blood doesn't go in anymore, and then it won't bleed in the future. So that's a very common way of doing it now," Blackburn told ABC13.

The second method, surgery, is also common. About 30% of aneurysms in the United States are treated this way.

What is the survival rate?

Of the survivors, there are people who do really well and are able to return to work. But some go on to have difficulties with daily activities and experience memory problems and may even become disabled. Depending on where the aneurysm is in the brain, a patient can have weakness, numbness, may not be able to talk, feed or dress themselves.

"There's some survivors that do well, but they're just not perfect. They say, 'I used to be an accountant, and I just can't concentrate like I used to.' You talk to them, you know, at the restaurant or on the street, and they seem normal but if you push them, then they have cognitive deficits and those can be very debilitating even though they're not obvious, and that can happen long term," Blackburn described. 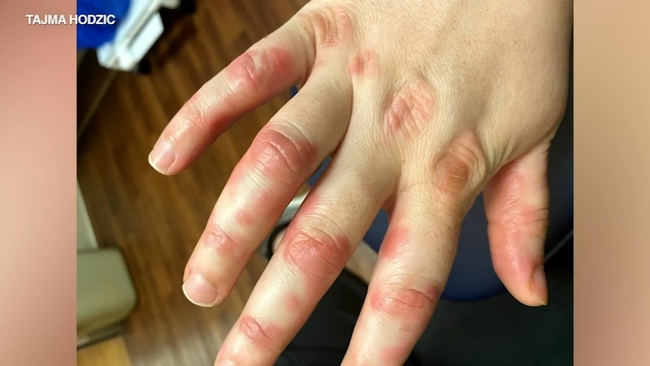