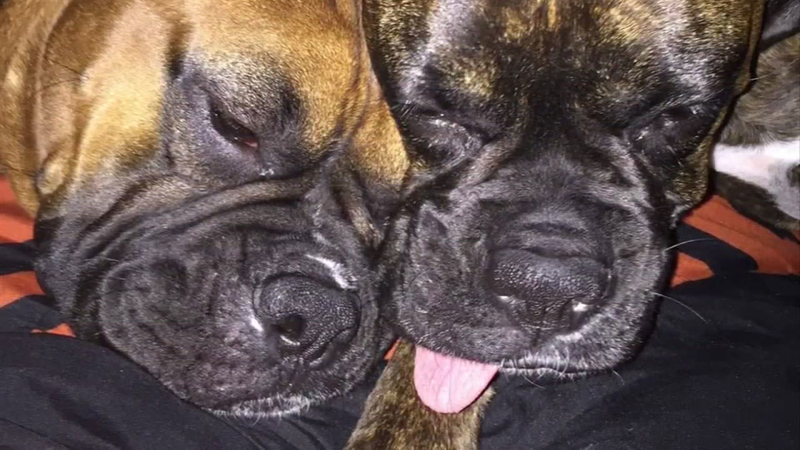 He has pain from losing a pet.

"These dogs were our life," added Thompson.

The boxers, Percy and Drake, were inseparable. Percy loved having her son nearby.

"They're always on their leashes," he said.

They're a part of the Thompson family. That's why Larry Thompson says he feels like he's lost a loved one.

On Monday evening, the dogs heard the garage open.

"Usually when the garage opens the dogs get excited. Them being boxers they like to run they like to just go and they do take off," said Thompson.

This time Percy and son took off down the road. Jared and his brother went chasing after them.

"We ran all the way down to the stop sign. I got about almost to the end of the street and I started hearing gunshots," added Jared.

Precinct 4 deputies say an off-duty HPD officer who lives on the next street says the dogs ran into his garage. He fired his personal gun, shooting each dog three times.

"We ran around the corner and I see the guy with the gun, and I just moved and I just looked at him and I said, 'Why did you do that?' and he said they were about to attack me," said Thompson.

Percy tried to make it back home, but fell dead a few houses away.

"Drake was actually licking Percy. He knew something had happened," he said.

Jared rushed Drake to the vet ER. He spent several hours Tuesday in surgery but should be OK.

"She told me he was a very lucky guy there's a pretty big hole in his trachea," said Thompson.

The officer isn't facing any charges. He says the dogs approached him aggressively. But the Thompson family says they're boxers wouldn't harm anyone.

"They may come up and give a couple of barks or this or that, but just to come up and absolutely attack I find it very hard to believe," added Thompson.