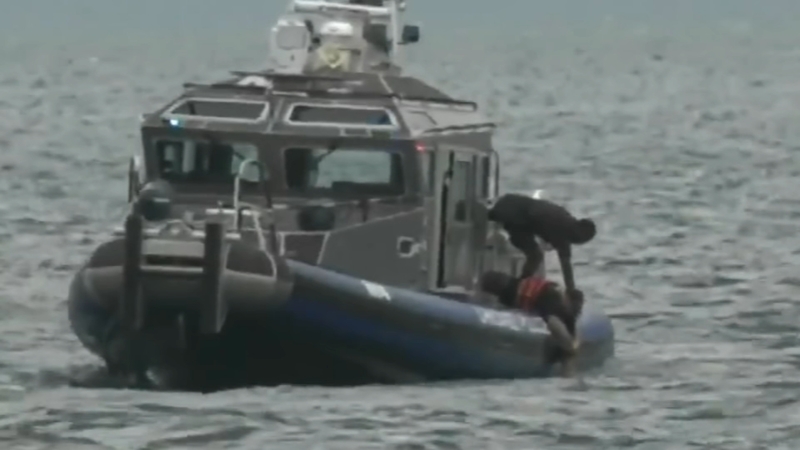 CHICAGO -- A dog rescued by police Monday from Lake Michigan was reunited with its owner two days after it went missing.

Chicago Police Officer Ordaz Jiminez and FTO Terzich received a call for a dog in the water at the Montrose Harbor, according to a tweet by CPD. Around 10 a.m., they called the Chicago Police Marine Unit and the Chicago Fire Department for help.

Officer Ordaz Jimenez and FTO Terzich receive a call of a dog in the water today. With the help of CPD Marine Unit M4 and the Chicago Fire Dept. Officers resuce the dog named Leyla from Lake Michigan and safely reunite Layla to owner. Thank you officers for your hard work. pic.twitter.com/Vo0yxS5xUp

"I just wanted to make sure that the dog was still alive and was going to be able to reunite her with its owner," Terzich said.

Police rescued the dog, named Laila, from Lake Michigan, about half-mile offshore, and took the dog to an area vet. They reported that the dog was in "good, tail-wagging condition," a police spokesperson said.

Charles Bogenberger speaks after his dog, Laila, was rescued from Lake Michigan at Montrose Harbor.

The dog's owner, Charles Bogenberger, said he was at the Montrose dog beach Saturday when Leila ran out of a gate that had been left open.

"My first thought was, 'Is she alive?' I didn't think she was going to make it through the weekend but this girl is a fighter, she can survive," Bogenberger said.

"I had no idea she could swim until yesterday, but apparently she's a real Michael Phelps," Bogenberger said.

Bogenberger adopted Laila from a shelter in Denver, Colorado.