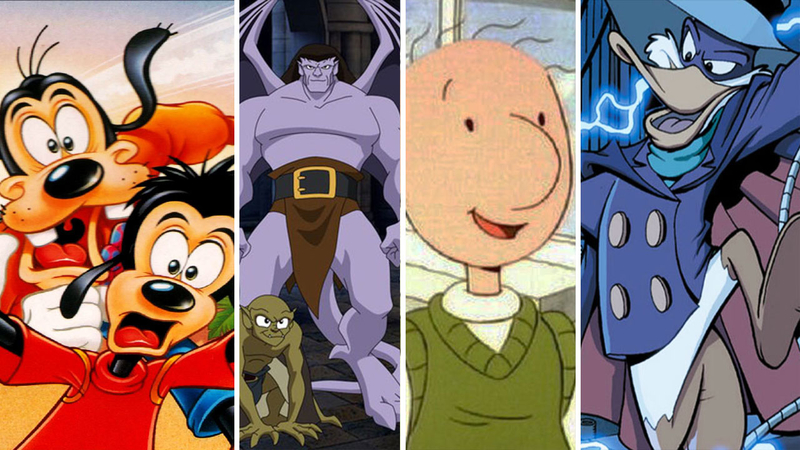 There's a certain magic missing from all of our lives these days.

The bright shining gem of afternoon and Saturday morning TV, "The Disney Afternoon," debuted 27 years ago this month, on September 10, 1990.

Today we look back at seven of Disney's brightest and most shining network TV cartoons:

"Disney's Adventures of the Gummi Bears" (1990)
These cute bouncy bears with a long and storied medieval history seemed about as hopped up on sugar as we were. Fondly cherished are the stories of the Gummi Bears, and how they battled against evil forces with their ancient magic.

"Chip N' Dale: Rescue Rangers" (1990)
This show made Disney's chipmunk pals more than a sideshow to Mickey Mouse cartoons. "Rescue Rangers" gave Chip and Dale the teeth to fight crime, score some cheese, and leave enough time for our tiny heroes to catch their favorite TV show in their tree-based headquarters.

"Darkwing Duck" (1991)
Let's get dangerous! By day, Drake Mallard was a suburban father. By night, he kicked butt and brought down foes like Negaduck, Megavolt, Dr. Reginald Bushroot and The Liquidator. Bonus: We loved how Launchpad McQuack crossed over from "Ducktails" to join Darkwing as his sidekick.

"Goof Troop" (1992)
Somehow between all that slapstick, Goofy managed to have a son, Max, and moved in next to Pete and his son, P.J. We loved the father-and-son comedy duo and their wacky adventures. The popular cartoon gave rise to two movies, including the incredible "A Goofy Movie," released in 1995.

"Gargoyles" (1994)
In the same vein as "Batman: The Animated Series," this dramatic animated series brought some real action to The Disney Afternoon that still draws fans to this day. After spending thousands of years petrified in stone, the Gargoyles burst forth onto the scene in New York City, playing role of Gotham's protectors of the night.

"Doug" (1998)
The once Nickelodeon cartoon was acquired by Disney in 1996, and began airing on ABC's One Saturday Morning and syndicated Disney's One Too. When "The Disney Afternoon" ended after its nearly seven-year run in August 1997, the cartoon was packaged in an unbranded block of Disney programs for syndication, which also included "DuckTales," "Quack Pack," "Mighty Ducks," "101 Dalmatians: The Series," and "Hercules."

This really brings back memories!

The new teaser trailer for 'Coco' is absolutely breathtaking