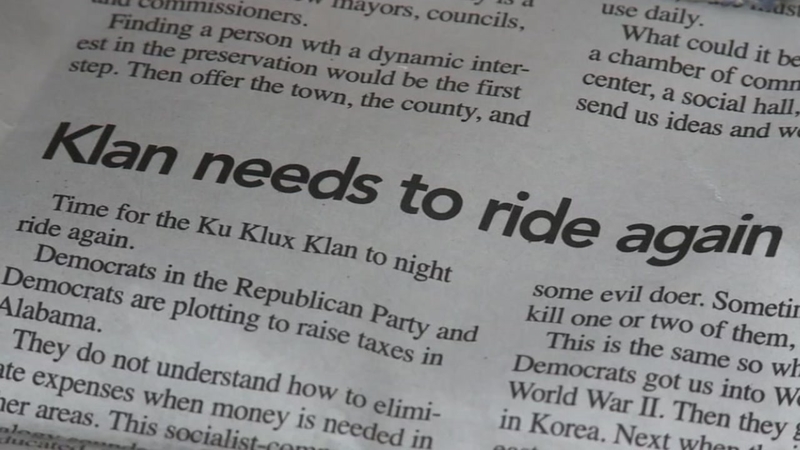 A small-town newspaper has called for a resurgence of the Ku Klux Klan.

MONTGOMERY, Alabama -- A small-town newspaper has called for a resurgence of the Ku Klux Klan, prompting two universities to withdraw the awards it had given its editor.

Auburn University and the University of Southern Mississippi decided Tuesday to rescind previous honors for Goodloe Sutton, editor and publisher of The Democrat-Reporter of Linden, Alabama.

An editorial published last week began: "Time for the Ku Klux Klan to night ride again." The editorial says Democrats and "Democrats in the Republican Party" are plotting to raise taxes in Alabama, so the Klan should raid "gated communities" where they live.

Sutton told the Montgomery Advertiser he stands by his Feb. 14 editorial. During an interview, Sutton suggested lynchings as a way to clean up Washington. Sutton also questioned whether the KKK is violent, claiming America's most feared white supremacist terrorist organization "didn't kill but a few people."

The Alabama Press Association Board said in a brief statement that its board of directors voted Tuesday to censure Sutton and suspend The Democrat-Reporter's membership.

Dating to 1879, the newspaper's editorials are consistently conservative and often critical of the Democratic Party. The use of "Democrat" in its name reflects back to the period when nearly all white conservatives in the South were Democrats.

The KKK editorial was only the latest in a series of provocative opinions expressed by The Democrat-Reporter, which was lauded two decades ago for coverage rooting out corruption in the local sheriff's department.

In a December editorial about the high cost of crime, the newspaper said: "Giving addicts enough free dope to kill themselves is cheaper than putting them in prison for killing other people to get a few bucks to buy more dope."