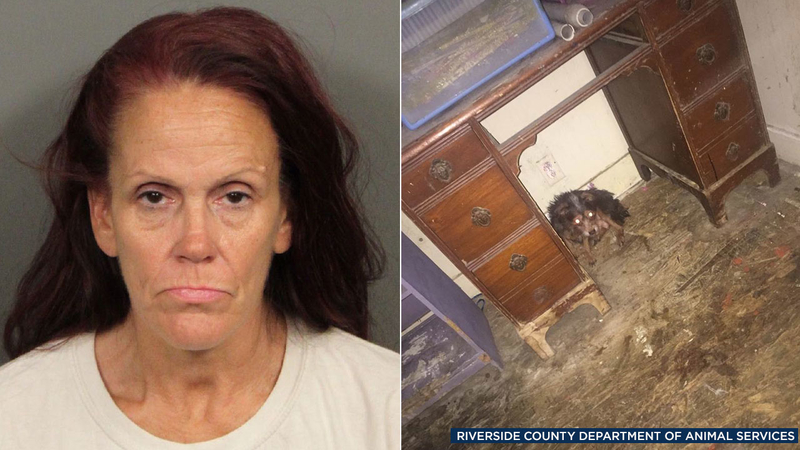 Culwell is accused of putting the puppies in a plastic bag, then discarding them in a dumpster amid 90-degree weather.

Video shows a woman stepping out of a white Jeep, peering into a dumpster used for recyclables, then dropping the bag filled with the puppies into a pile of trash behind Napa Auto Parts in Coachella Thursday before driving away.

A man who rummaged through the dumpster shortly afterward spotted the bag and took it to the store, an act officials say saved the puppies lives.
EMBED More News Videos

Authorities on Monday confirmed the arrest of a 54-year-old woman accused of dumping seven newborn puppies into a Coachella dumpster.

Authorities took Culwell into custody Monday at her home, where they found 38 other dogs, which all had to be impounded. Those dogs are now being cared for at the Coachella Valley Animal Campus in Thousand Palms.

The dogs are mainly small terrier mixes that range in age from adult to 3 months old. They appear to be in general good health, despite the conditions they were living in.

Culwell faces up to seven counts of animal cruelty and misdemeanor animal abandonment charges. It isn't Culwell's first brush with the law. The woman has a lengthy criminal history with convictions ranging from check fraud to drug possession.

Authorities said the seven puppies may not have survived the 90-degree heat had they not been found within an hour of being dumped. A local rescue is caring for the little ones.

Video obtained by Eyewitness News on Monday shows the moments a man discovered seven newborn puppies abandoned in a dumpster behind a Coachella store.

Many of people who have followed this story have asked if the puppies' mother was among those found in Culwell's home.

Animal Services Officer Jose Cisneros said unless the owner identifies the dog, "it would be a guessing game."