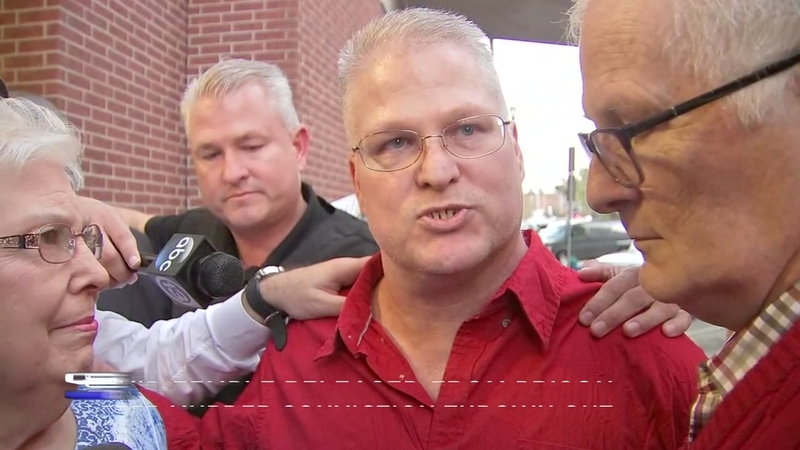 HOUSTON (KTRK) -- David Temple, the Katy man once convicted in the killing of his pregnant wife was released from prison around 5:30 p.m. Wednesday while awaiting the possibility of a new trial. It is the latest in a 17-year saga that includes heartache, an affair and courtroom drama.

Temple had his mug shot taken and posted a $30,000 bond before walking out to a mob of reporters and cameras.

"I just thank God, it's only possible through him," Temple said. "I thank my family."

"It's been a long journey. This is a portion of this journey that's been completed and we're waiting for justice to be served once and for all."

Last month, the highest criminal court in Texas threw out the conviction of the former Alief High School football coach found guilty in 2007 of killing his pregnant wife and unborn baby. Belinda Temple was 8 months pregnant when she was shot in the back of the head. The couple also had a 3-year-old son. Testimony revealed Temple was having an affair with a co-worker who later became his wife.

The Court of Criminal Appeals set aside the judgment against David Temple, concluding prosecutors hid or delayed revealing hundreds of pages of evidence to Temple's defense team as he was tried for the 1999 murder of his wife Belinda.

"A prosecutor has a duty to give to the defense any evidence that's favorable to the defense," said Temple's attorney Stanley Schneider after the ruling.

Wednesday afternoon, Andy Kahan, crime victim advocate for the City of Houston and a longtime supporter of Belinda Temple's family said they were hopeful Harris County District Attorney-elect Kim Ogg would thoroughly review the case and choose to retry it. They've always believed in Temple's guilt.

Ogg's team says she will look at the case when she takes office next month.

Then-prosecutor Kelly Siegler has never responded to the high court's ruling but was adamant in a 2012 interview with Eyewitness News that the allegation of evidence withholding was simply untrue.

Schneider has said there was evidence of another plausible killer - someone other than Temple.