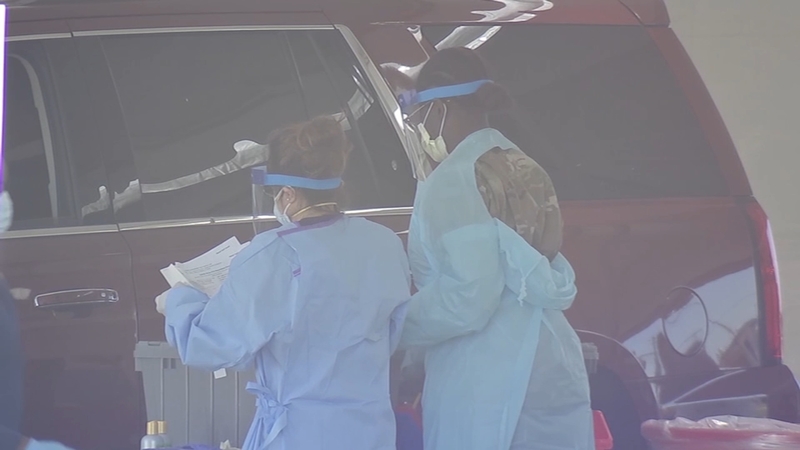 HOUSTON, Texas (KTRK) -- Federal health officials are pushing back on the news that they are withdrawing their support of Houston and Harris County's large, stadium-based COVID-19 testing site.

In a media call this afternoon, the Department of Health and Human Services told reporters that the federal government is merely "transitioning" the large testing sites to state level. Administration officials also said they are planning to rely on Federally Qualified Health Clinics (FQHC) to take up some of the testing load.

The news is not sitting well with Houstonians who are trying to get a test, nor with elected officials representing the Houston region.

"Honestly, it feels like this whole city is being hung out to dry," said Tish Ochoa, a small business owner and mom who began to show COVID-19 symptoms two days ago. "I had a really rough day yesterday. I haven't been able to hold down any food or water, and I've been having all sorts of gastro symptoms."

However, Ochoa has not been able to find an accessible test.

A quick check at CVS, Walgreens, and other federal subcontractor sites showed at least a two to three day wait for appointments.

The website to sign up for tests, operated by the State of Texas, is currently not working.

Still, federal HHS officials told ABC13 they are preparing to "sunset" the support of the large testing sites by June 30.

It is unclear how the state of Texas will take over the federal testing if the state's current testing is not even available.

With those concerns in mind, several members of the Houston Congressional Delegation sent a letter to federal officials asking that the federal sites continue to operate. Both Harris County and Houston's Public Health directors have done the same.
"It's really about making sure we sound the alarm to FEMA, and urge them not to stop funding the four testing sites," said Rep. Sylvia Garcia. "We want to extend it to August."

As far as moving some of the testing to Federally Qualified Health Clinics, the largest operator of such facilities in Texas sounded concerned. Legacy Community Health, which operates dozens of clinics in Southeast Texas, has been testing patients for COVID-19 since the pandemic began. Even with all other testing facilities open, Legacy said it's already at capacity.

Wednesday afternoon, Mayor Sylvester Turner said the city of Houston will try to continue the stadium based testing sites even if federal support is pulled.

However, they believe Houstonians would be best served if HHS officials allowed the testing to continue.

HHS officials, however, ended the conference call by saying reporters were being told incorrect information and that authorities are not decreasing testing.