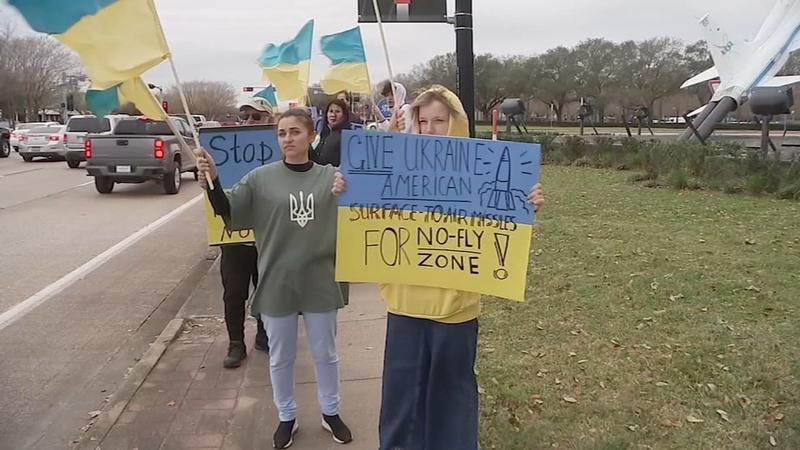 CLEAR LAKE, Texas (KTRK) -- A week after rescuing her children and parents from Ukraine, Dr. Julia James is wasting no time fighting for her country.

"I'm sending a message to Russian people, to Russian cosmonauts, that it's a bloody war in Ukraine," she said.

A self-described space enthusiast, James said she has been reaching out to Russian cosmonauts from her home in League City.

As a former university professor in Europe, she often set up virtual conferences between cosmonauts and her students. By using those connections, she began reaching out to those same leaders, and their responses over the last week, she says, were shocking, to say the least.

"They're saying that Ukraine is bombing themselves," said James.

James has seen the wrath of the war first-hand, traveling back to her hometown, Voznesens'k, which is located in the south part of Ukraine near the Black Sea. There, she rescued her children, who had been living with grandparents to study for the semester.

"So the plan was second semester, study in Ukrainian school to learn language," she said.

Her daughter, 14-year-old Valerie, and son, 8-year-old Alexander, have been splitting their education between Texas (where they were born) and Ukraine. James very proudly touts that her children speak three languages: English, Ukrainian and Russian.

But this semester, that long-practiced routine quickly changed. James rushed to Ukraine on Feb. 21, crossing into the country to reunite with her children and parents.

Four days later, she, her two children, two other children of friends, a 16-year-old and 20-year-old, made the trip to Hungary. The line of cars to cross was six hours long.

Her parents fled two days later, and by then, it was a mad dash.

"They just jumped to the car and (drove). Jumped into car and drove as fast as they can," said James. "They fled with only backpacks."

The family made it into Hungary, then flew from Budapest to Warsaw to Miami. It was in Florida where they reunited with James' brother.

The 16-year-old teen they also helped evacuate stayed in Europe. The 20-year-old friend traveled with the family to Houston, where she joined James, Valerie and other neighbors in a rally on Nasa Road 1.

"This is not just for the Ukrainian war. This is a war for the whole world," said James.