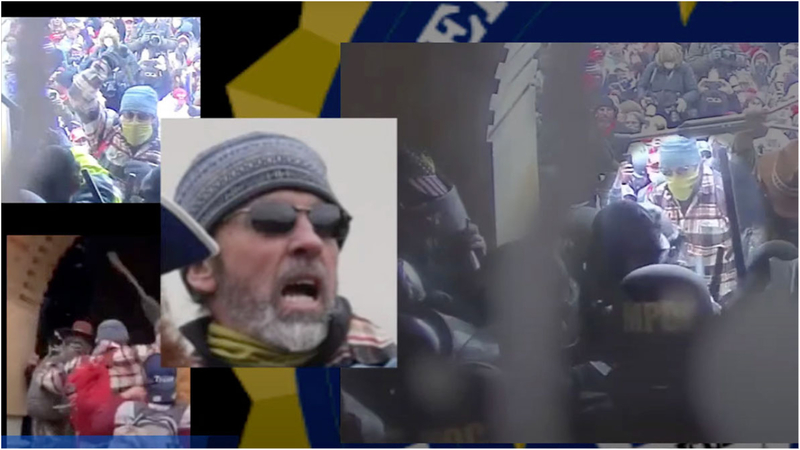 WASHINGTON -- The FBI released on Thursday several new video clips of violence toward police during the Capitol riot, as investigators continue their hunt for suspects.

The videos -- showing graphic moments of rioters beating police with metal poles, stolen shields and chemical sprays -- highlight some of the more shocking moments from the riot, such as when the crowd worked to overcome a police line to push through a lower archway into the Capitol building.

Even with so many arrests and footage documenting the siege already, the FBI's release and request to the public for help identifying the people in the video shows how they continue to pursue cases of severe violence from the pro-Trump crowd.

Video capturing the hours-long siege inside and outside the Capitol has been immense in its volume and available publicly for months, since many participants and observers had already posted footage online. But investigators have worked to zero in on specific rioters and moments, scrubbing through the tens of thousands of hours they've collected of police body cameras, news broadcasts, surveillance images and video taken from social media and even from the cell phones of rioters who have been arrested.

The FBI is asking for the public's help to find the person who left pipe bombs at the RNC and the DNC the night before the Jan. 6 Capitol riot in Washington, D.C.

The FBI's release on Thursday now matches clips of rioters, whose faces are hard to see clearly as they punch, spray or batter police, with clearer images of faces in the crowd.

The Justice Department has charged more than 65 people for assaulting law enforcement but is still seeking information to identify others involved in assaults during the insurrection, according to a press release on Thursday. The assault cases are some of the most serious among more than 300 people arrested on charges stemming from the Capitol riots, which left five people dead, including a US Capitol Police officer, and injured more than 100 law enforcement officials.

Many of the 10 clips released Thursday are extremely disturbing. One shows a protestor grabbing an officer by the helmet and smashing his head repeatedly against a door jamb.

In one 22-second clip, a man with a patterned blue mask covering his mouth is seen shoving the face of an officer at one of the entrances of the Capitol. In a 38-second video, a man with a yellow face covering and a red backpack is seen repeatedly striking officers with what appears to be a stick.

And in a 56-second clip, a man is seen using what appears to be a tree branch to strike at officers that are preventing the crowd from entering the Capitol.

The longest video released on Thursday shows three minutes of body camera footage of a man wearing a black, red and white jacket attacking officers while another rioter was on the ground. An officer used a stun gun to fend the man off.

Another video shows a man in an aqua blue windbreaker jacket with a navy blue hood walking up stairs that overlooked an area with several identifiable law enforcement officers. The unidentified man is seen spraying a cloud of smoke onto the officers and walking away.

"The FBI is asking for the public's help in identifying 10 individuals suspected of being involved in some of the most violent attacks on officers who were protecting the U.S. Capitol and our democratic process on January 6," Steven M. D'Antuono, assistant director in charge of the FBI's Washington Field Office, said in a statement. "These individuals are seen on video committing egregious crimes against those who have devoted their lives to protecting the American people.

Among those who have already been charged in connection to the riot are two men who were arrested for assaulting USCP Officer Brian Sicknick, the officer who died after the attack. The DOJ announced their arrests Monday, alleging the pair worked together to spray police, including Sicknick, with a toxic chemical spray during the riot. Investigators have not released Sicknick's cause of death.

Federal prosecutors have also filed charges against Thomas Sibick, who allegedly participated in the brutal assault of DC Metropolitan Police Officer Michael Fanone. Prosecutors said Sibick was seen on police body-camera footage assaulting Fanone while he lay on the ground outside the Capitol during the riot.

Fanone told CNN earlier this year that he had been tased several times in the neck, had been beaten with a flagpole and had heard people screaming, "Kill him with his own gun," while rioters tried to pull his weapon out of its holster.