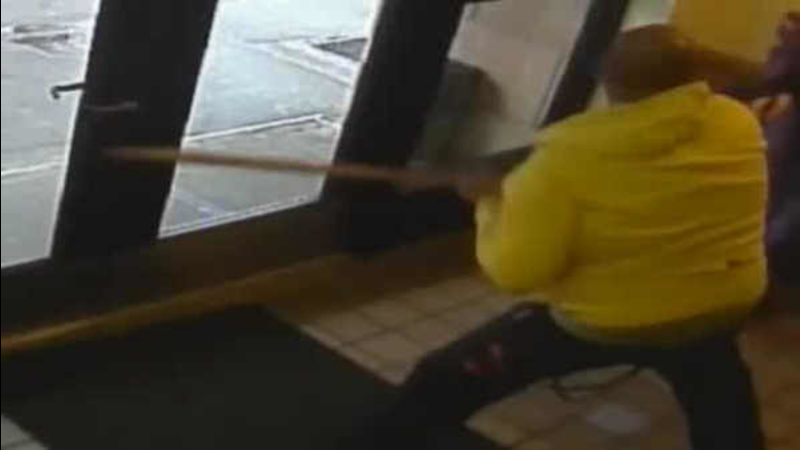 Man beaten with broom stick in the Bronx

BRONX, NEW YORK -- Police are searching for the assailant who beat a man with a broom in the lobby of a building in the Bronx.

The attack happened Monday morning in a building near Boston Road and Union Avenue in the Morrisania section.

There is no way to describe the attack other than vicious. A burly suspect in a a yellow sweatshirt is seen on video beating a defenseless disabled man with a broom stick.

The victim himself called the attack 'nasty'.

Doug Jenkins is still in pain two days after the assault in the lobby of his building. Jenkins, who has a club foot and is a throat cancer survivor, says he had a bad feeling about the man who followed him inside after asking for 50 cents and a cigarette.

Jenkins loitered in the lobby while the suspect made believe he was getting on the elevator, but instead ducked into a janitor's closet.

"He went inside, got the mop handle, came out and started attacking me," said Jenkins. The beating left Jenkins with bruises on his hands and above his left eye.

The force of the blows broke his cane, which the victim used to try and defend himself with.

Once on the ground, the suspect stole Jenkins' wallet and ran off. The 60-year-old was treated and released at a hospital.

"He's just an old guy, he don't bother nobody," said building resident Daniel Kirby. "He comes outside, he stays to himself, he's a a nice guy."

The building on Boston Road is run by a non-profit group and is occupied mainly by seniors or those with physical disabilities, with many complaining about the desk in the lobby, which is supposed to be staffed between 8 and 4.

At the time of the incident it was unattended. "It was frightening, very frightening," said Jenkins. "I can't even be secure in my own building."

The NYPD describes the suspect as an adult male, Hispanic, approximately 5'5" tall, 140 Lbs., with a mustache, heavy build with a shaved head. He was last seen wearing a yellow hooded sweatshirt with a print design on the front, blue jeans and black sneakers.