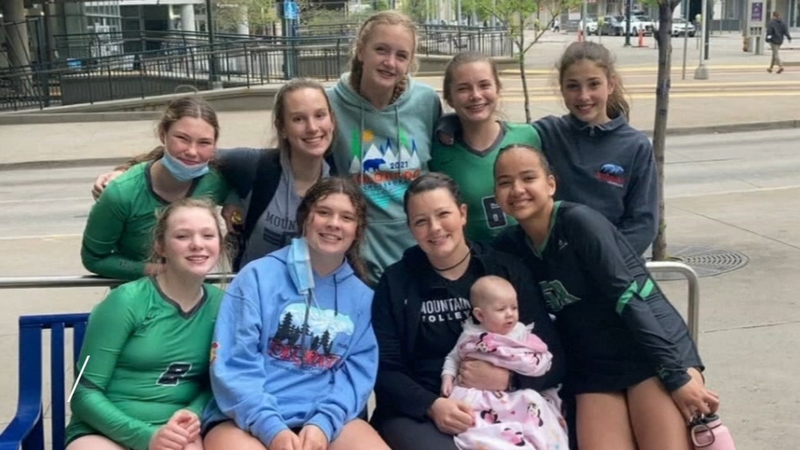 DENVER -- A volleyball tournament in Colorado told the coach of one of the teams that she could not breastfeed her 4-month-old daughter at the event.

The coach and other new moms said they were all barred from the tournament by its organizer.

"We are a private event. Attendance is a privilege that we can revoke at any time," the tournament's website reads.

According to the local ABC affiliate, Colorado State law says a mother may breastfeed in any place she has a right to be. However, the Denver City Attorney's Office said "After our review, we have no reason to believe there has been a violation of any city ordinance or law. This is a private event. It is the event organizer and USA Volleyball who set the rules for entry and access to the court area."

Coach Dixie Loveless said she wishes she'd known she would not be allowed to coach her team before they signed up for the tournament and traveled to Colorado.

"We came to Denver thinking this was a diverse cultural city, that was full of acceptance, and we're being told that a 4-month-old that relies upon their mother for sustenance cannot even sit in a lobby away from these girls, so that she can take care of her baby. This is not right," a mother of one of the players said.

Coach Loveless said she's trying to teach her players that they can have a family and still pursue their own lives.

"I want them to know you can do both," she said. "You don't have to (think,) 'Oh I had a kid and now I can't do anything. I have to just be a mom. I'm not allowed to go and do other things that other people, who are not nursing, are allowed to do.'"

"It has been brought to USA Volleyball's attention that a club coach participating in the Colorado Crossroads tournament in Denver says she was prohibited from bringing her breastfeeding baby into the tournament. Colorado Crossroads is one qualifier event for the USA Volleyball Girls Junior National Championship. Colorado Crossroads is not operated or controlled by USA Volleyball and its jurisdiction over the event is limited. USA Volleyball has expressed its disagreement with this decision to the tournament director and is encouraging the tournament to reverse the regulation."
Report a correction or typo
Related topics:
family & parentingcoloradobabysportsbreast feeding
Copyright © 2022 KTRK-TV. All Rights Reserved.
TOP STORIES
Man charged with son's murder says he shot in self-defense
Paraglider not seen by air traffic control before crash, report finds
Yes, there's a West Loop closure this weekend
Laundrie claimed responsibility for Petito's death in notebook: FBI
'Parental Bill of Rights' gives parents power on child's education
Woman gains life partner after deadly explosion forces her to relocate
Houston city councilmember raises concerns over bail bond debate
Show More
Bundle up! Clear and cold night ahead
We've got our eyes on Texans' next head coach candidates
Former teacher in The Woodlands gets 3 years for improper relationship
Fort Bend Co. judge raises concerns over new voting law issues
CPSC issues warning on infant loungers
More TOP STORIES News