Suspect arrested in Florida in connection with mailed pipe bombs 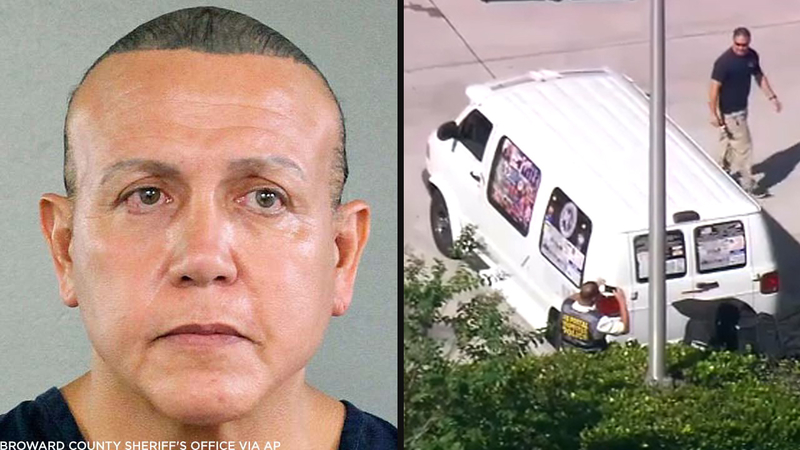 Suspect arrested in Florida in connection with mailed pipe bombs

OPA-LOCKA, Florida -- A Department of Justice spokesperson confirms that one person has been arrested in Florida in connection with the pipe bombs that have been mailed to several prominent Democrats and other critics of President Donald Trump.

Law enforcement sources tell ABC News that 56-year-old Cesar Sayoc, of Aventura, Florida, was taken into custody as a suspect in the suspicious package investigation. He was arrested at an auto parts store in the nearby city of Plantation, and he reportedly has a criminal history and ties to New York City.

Officers were seen examining a white van, its windows covered with an assortment of stickers that included images of American flags and what appeared to be logos of the Republican National Committee and CNN. Authorities covered the vehicle with a blue tarp and took it away on the back of a flatbed truck.

A press conference will be held at the Department of Justice at 2:30 p.m. ET.

President Donald Trump spoke after the arrest, saying Sayoc will be prosecuted "to the fullest extent of the law."

"We must never allow political violence take root in America," he said. "These terrorizing acts are despicable."

Authorities have now recovered 12 packages as part of the widening investigation into suspected bombs, after devices were discovered in Florida and New York City Friday morning.

The 11th package was recovered at or near Opa-locka, Florida, and was addressed to Sen. Cory Booker of New Jersey. It was found during an oversight search of that facility, according to a law enforcement official.

A 12th device was discovered at the 52nd Street post office in Manhattan and was addressed to Former Director of National Intelligence James Clapper via CNN.

Investigators were led to South Florida in part by forensic evidence obtained from the packages and from US Postal Service images of mail that is processed through their facilities. They all had a return address of Rep. Debbie Wasserman Schultz.

Two were sent to former Vice President Joe Biden in Delaware, and another was addressed to Robert De Niro and sent to a Manhattan address associated with the actor.

None of the devices exploded, and no one was injured.

Investigators were analyzing the innards of the crude devices to reveal whether they were intended to detonate or simply sow fear just before Election Day.

Law enforcement officials said that the devices, containing timers and batteries, were not rigged to explode upon opening. But they were uncertain whether the devices were poorly designed or never intended to cause physical harm. The common thread among the bomb targets was obvious: their critical words for Trump and his frequent, harsher criticism in return.

Trump claimed Friday he was being blamed for the mail bombs, complaining in a tweet sent before dawn: "Funny how lowly rated CNN, and others, can criticize me at will, even blaming me for the current spate of Bombs and ridiculously comparing this to September 11th and the Oklahoma City bombing, yet when I criticize them they go wild and scream, 'it's just not Presidential!'" He also complained that all this "bomb stuff" was distracting ahead of the midterm elections.

The package to Clapper was addressed to him at CNN's Midtown Manhattan address. Clapper, a frequent Trump critic, told CNN that he was not surprised he was targeted and that he considered the actions "definitely domestic terrorism."

Jeff Zucker, the president of CNN Worldwide, said in a note to staff that all mail to CNN domestic offices was being screened at off-site facilities. He said there was no imminent danger to the Time Warner Center, where CNN's New York office is located.