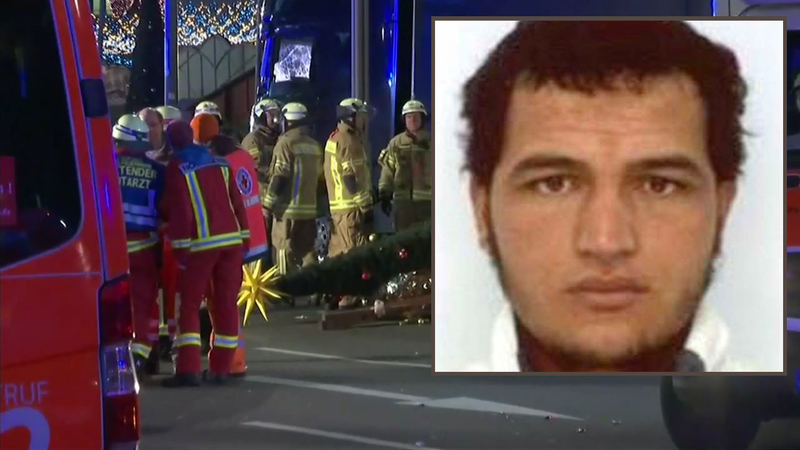 ROME -- The Tunisian man suspected in a deadly attack on a Christmas market in Berlin was killed early Friday in a shootout with police in Milan during a routine patrol outside a train station, ending a Europe-wide manhunt.

OFFICIALS: Berlin market attack suspect had been under surveillance for months

Anis Amri traveled from Germany through France and into Italy after Monday night's truck attack in Berlin, at least some of it by train, Italian police said. French officials refused to comment on his passage through France, which has increased surveillance on trains after recent French attacks and the one in Germany.

Italian Premier Paolo Gentiloni praised the two young police officers for their courage in taking down Amri during a routine check of ID papers while he was alone outside the deserted station. But he also called for greater cross-border police cooperation, suggesting some dismay that Europe's open border policy had enabled Amri to move around easily despite being its No. 1 fugitive.

Amri, who shot one of the police officers in the shoulder, was identified by fingerprints supplied by Germany.

"The person killed, without a shadow of a doubt, is Anis Amri, the suspect of the Berlin terrorist attack," said Italian Interior Minister Marco Minniti.

The Islamic State group claimed responsibility for the attack outside Berlin's Kaiser Wilhelm Memorial Church in which a truck plowed into a Christmas market, killing 12 people and injuring 56. It also noted his death in Milan and released a video showing him pledging allegiance to the militant group.

Amri has been linked to an extremist recruitment network allegedly run by Ahmad Abdulaziz Abdullah A., also known as Abu Walaa, a Germany-based preacher who was arrested last month, said Holger Muench, head of the Federal Criminal Police Office.

German Chancellor Angela Merkel ordered an investigation into all angles of the case after it emerged that German authorities had tracked Amri for months on suspicion of planning an attack.

"We can be relieved at the end of this week that one acute danger has been ended," she said in Berlin. "But the danger of terrorism as a whole remains, as it has for many years - we all know that."

Milan, Rome and other cities have been on heightened alert, with increased surveillance and police patrols. Italian officials stressed that the young officers who stopped Amri didn't suspect he was the Berlin attacker but rather grew suspicious because he was a North African man, alone outside a deserted train station at 3 a.m.

Amri, 24, who had spent time in prison in Italy, was stopped during a routine patrol in Milan's Sesto San Giovanni neighborhood. He pulled a gun from his backpack after being asked to show his ID and was killed in an ensuing shootout.

Officer Christian Movio, 35, was shot in the right shoulder and had surgery for what doctors said was a superficial wound. His 29-year-old partner, Luca Scata, fatally shot Amri in the chest.

Amri had no ID or phone, carrying only a pocket knife and the .22-caliber pistol he used to shoot Movio, police said.

"He was a ghost," Milan police chief Antoio de Iesu said, adding that he was stopped because of basic police work, intensified surveillance "and a little luck."

Amri passed through France before arriving by train at Milan's central station where video surveillance showed him about 1 a.m. Friday, de Iesu said. A ticket indicated he traveled from Chambery, France, through Turin and into Milan, an Italian anti-terrorism official said.

A Milan anti-terrorism official, who spoke on condition of anonymity because he was not authorized to talk publicly about the investigation, said Amri made his way to the piazza outside the Sesto San Giovanni train station about 7.5 kilometers (nearly 5 miles) from the main station.

Authorities are still trying to determine how Amri got to the piazza because only a few buses operate at that hour.

"It is now of great significance for us to establish whether the suspect had a network of supporters or helpers in preparing and carrying out the crime, and in fleeing, whether there were accessories or helpers," Frank said.

Prosecutors also want to know whether Amri's gun was the same one used to shoot the Polish driver of the truck he had commandeered for the attack, Frank added. The driver was found dead in the vehicle's cab.

De Iesu confirmed the truck's cargo was loaded Dec. 16 in another Milan suburb, Cinisello Balsamo, before heading to Berlin, but said there was no evidence to connect it to Amri's presence nearby early Friday.

The Milan anti-terrorism official said investigators want to see if Amri had any contacts in Milan. There is no evidence he passed through Milan in his previous stay in Italy, after he left Tunisia following the 2011 Arab Spring.

Muench, of the German Federal Criminal Police Office, said Amri's name "has come up" in connection with the network centering on Abu Walaa, Muench said. Abu Walaa was arrested Nov. 8 with four other men and accused of leading a group whose aim was to steer people to the Islamic State group in Syria. Prosecutors say the network smuggled at least one young man and his family to Syria.

CNN reported that German investigative files it obtained detailed the extremist recruitment network raised funds through robberies and fraudulent loans, and used a common curriculum to try to get recruits for IS.

Amri's brother Abdelkader told The Associated Press the family wants to learn the "truth about my brother," but refused to comment on his death.

His family, which lives in the central Tunisian town of Oueslatia, wants his remains sent home from Italy. Tunisian Foreign Ministry spokesman Bouraoui Limam said it would "take a while" for the body to be repatriated because Italian, German and Tunisian investigators need to carry out their examinations.

Amri served 3 years in jail in Italy for setting a fire at a refugee center and making threats, among other things - but authorities apparently detected no signs he was becoming radicalized. He was transferred repeatedly among Sicilian prisons for bad conduct, with records saying he bullied inmates and tried to spark insurrections.

His mother said he went from there to Switzerland and then to Germany last year.

German authorities deemed him a potential threat long before the Berlin attack and even kept him under covert surveillance for six months this year.

They had been trying to deport him after his asylum application was rejected in July but were unable to do so because he lacked valid identity papers and Tunisia initially denied he was a citizen. Authorities said he has used at least six different names and three nationalities.

Merkel said she told Tunisian President Beji Caid Essebsi the repatriation of Tunisians who aren't entitled to residency in Germany needs to be stepped up. Essebsi called for tighter cooperation to fight "the plague of terrorism that threatens the security and stability of all countries and all societies."

Tunisian authorities have insisted the reason it took so long to issue Amri's papers is that they needed to verify his identity, noting his numerous aliases.

Italy said it expelled a 37-year-old Tunisian who showed signs of radicalization while in jail, putting him on a flight to Tunis on Friday. It brought to 131 the number sent out of the country since January 2015.

Keep checking back on this page to get real-time updates as this story unfolds. To get alerts for breaking news, download the ABC13 news app for iPhone or Android. You can also get breaking news alerts sent to you by email.
Related topics:
italyterrorismu.s. & worldromegermanyterror attack
Copyright © 2021 by The Associated Press. All Rights Reserved.
TOP STORIES
Families turn down Travis Scott's offer to pay for funerals
Power generators must submit report on winter plans today
Houston nanny sentenced to 30 years in prison for child molestation
Tory Johnson delivers 'Deals & Steals' in holiday shopping special
Robber's brazen attack on Houston delivery driver caught on video
4th student dies in Michigan high school shooting
What we know about the Michigan school shooting victims
Show More
Boys abandoned lived in 'filthy, disgusting environment,' deputy says
How expensive are the homes near Rice University?
Man accused of spying on female roommate with bathroom camera
Gov. Abbott promises 'the lights will stay on' this winter
Alec Baldwin speaks out on 'Rust' shooting in exclusive ABC interview
More TOP STORIES News