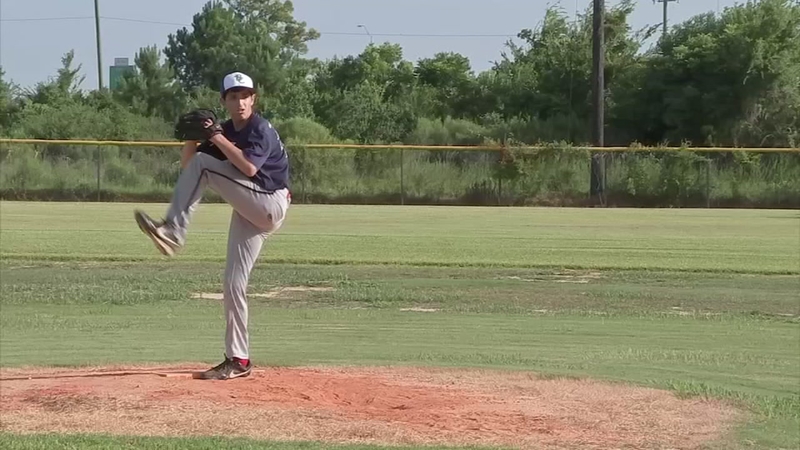 HOUSTON (KTRK) -- Baseball is full of numbers and stats, but there's one in particular that doctors say parents of young pitchers need to pay attention to - pitch count.

It's the number of throws a pitcher can make before he has to leave a game to protect his arm.

Professional baseball players live by pitch counts to prevent injury, but chances are that when a child is on the mound, no one is counting.

Former MLB pitcher Chad Beck was playing for the Toronto Blue Jays in 2012, one year after he got called up to the majors. He was used to the pop a ball makes when it hits a catcher's glove, but one day he heard a different kind of pop.

"And it almost felt like a rubber band in my arm kind of broke. And I felt my ligament basically slide up into my arm," Beck said.

The career-altering injury led to Tommy John surgery or reconstruction of the UCL, a ligament in the elbow.

The head physician for the Houston Astros says throwing injuries and surgeries like Tommy John are on the rise among professionals. But even more concerning is the increase in youth.

"A kid that loves to throw, tell them 4 months they can't even pick up a ball, and you can't compete in a game for 9-12 months, that's a big blow," said Dr. David Lintner, Chief of Sports Medicine at Houston Methodist and Houston Astros head physician.

Lintner says about 15 percent of injured players never make it back to the game.

"If you get hurt when you're 15 or 16 and it takes you a year to recover, by then you're 17, you're getting toward the end of your high school career and that has a big impact on whether you can go to the next level," Lintner said.

He says the cause is overuse and not enough rest, which is why major league teams live by pitch counts. A Houston Astros pitcher's limit is around 100 throws per game. Many youth teams, like Houston's Westbury Little League, do the same.

"Every team that plays at Westbury has to keep a tally sheet of every pitcher that pitches a game and those sheets are cross checked by the opposite team," said Westbury Little League dad Chris Cortes.

But Eyewitness News found that the agencies governing sports in 1,750 public and private Texas schools are not keeping up with pitch counts. Instead, their guidelines say players can pitch one game a day for an unlimited number of innings. If there is more than one game, a pitcher is limited to 10 innings. But even that can add up fast.

"The statistics are clear, if you're throwing more than 100 innings a year, your injury risk not doubles, but goes up approximately five times," Lintner said.

"Say no, he's pitched more than the recommended number of innings or pitches, and that's it," Lintner said. "You need to count the pitches that they're throwing not just with their little league team, but also with their travel ball team and their select team and their pitching coach. Those all count."

Take it from someone whose career could have been a home run.

"That might be able to save him to be able to play college ball or even pro and not be done with baseball when he's 16 years old," Beck said.

The organizations that oversee Texas school athletics, UIL and TAPPS, are meeting to review changes to their pitch count rules this fall.

In the meantime, parents can use the MLB's Pitch Smart website for limits, guidelines, and injury prevention tips.

For recommendations for preventing injuries in youth baseball pitchers from the American Sports Medicine Institute, click or tap here.