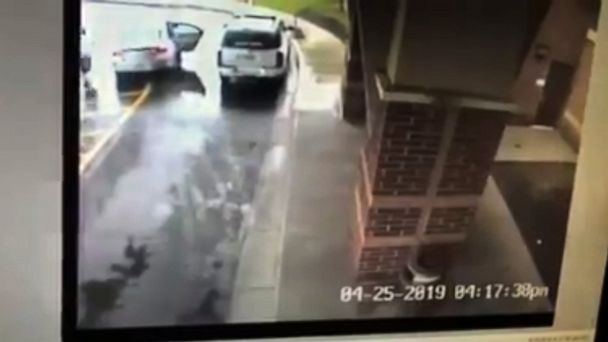 Ohio police are recognizing an 8-year-old boy who bravely pulled himself and his 10-year-old sister to safety after a man stole his great grandmother's car.

Their great grandmother, Nita Coburn, 69, was taking another woman to Atrium Medical Center in Middletown on Thursday afternoon. The two kids. Chance Blue and Skylar Weaver, were sitting in the back seat.

A few seconds after Coburn exited the car to help the woman get to the emergency room, Dalvir Singh, 34, jumped into the driver's seat and took off with the children still in the back, police said.

Chance opened the door to escape with his Skylar, who was about to jump out when Singh grabbed her by the hoodie, according to police.

Chance pulled her away from Singh, and they both tumbled out of the moving car.

"This little guy is a hero. No question. He pulled his sister out of the car with no concern for his own safety," Middletown Police Chief Rodney Muterspaw said. "That is incredible at his age."

Coburn didn't realize the children had escaped on the passenger side of the car. "I heard them screaming and I ran to the car," she said.

She chased the car, opening the driver's side door to regain control of the car.

Singh slammed the door shut again and locked the door, while Coburn hung onto the car, thinking the children were still inside.

The car dragged Coburn until Singh sped up, forcing her to let go.

Officers Kirby and Engleka - identified only by their last names - saw Coburn's car speeding away.