What does 'unmasking' someone in an intel report mean?

In 2016, Obama administration officials received intelligence reports that were concerning, but incomplete.

Surveillance of Russia's ambassador to the U.S. revealed he had interacted with an unnamed American who may have been undercutting efforts to pressure Vladimir Putin's government.

Using a common process known as "unmasking," they asked intelligence agencies to reveal the American's name. It was Michael Flynn, an adviser to President-elect Donald Trump.

The unmasking of Flynn has become Exhibit A in Trump's unsubstantiated claim that he and his aides were the targets of a scandalous Obama administration "witch hunt."

The top intelligence official, Richard Grenell, now has stepped into the unmasking issue, declassifying the names of the Obama administration officials who may have requested the unmasking. Those names, disclosed Wednesday by two Republican senators, included Trump's Democratic presidential rival Joe Biden.

There is nothing illegal about unmasking and the declassified document states that proper procedures were followed. While Trump casts unmasking as sinister, his administration has used the process more frequently than Obama's.

Questions and answers about "unmasking" Americans' names in intelligence briefs:

During routine, legal surveillance of foreign targets, names of Americans occasionally come up in conversations. Foreigners could be talking about a U.S. citizen or U.S. permanent resident by name, or a foreigner could be speaking directly to an American. When an American's name is swept up in surveillance of foreigners, it is called "incidental collection." In these cases, the name of the American is masked before the intelligence is distributed to administration officials to avoid invading that person's privacy.

Unless there is a clear intelligence value to knowing the American's name, it is not revealed in the reports. The intelligence report would refer to the person only as "U.S. Person 1" or U.S. Person 2." If U.S. officials with proper clearance to review the report want to know the identity, they can ask the agency that collected the information - perhaps the FBI, CIA or National Security Agency - to "unmask" the name.

"Literally hundreds of times a year across multiple administrations. In general, senior officials make the requests when necessary to understand the underlying intelligence. I myself did it several times a month and NSA adjudicates the request. You can't do your job without it," he said.

Morell emphasized that unmasking is not the same as declassification. "When a name is unmasked, the underlying intelligence to include the name remains classified so leaking it would be a crime."

When would an intelligence agency unmask a name?

The request is not automatically granted. The person asking has to have a good reason. Typically, the reason is that not knowing the name makes it impossible to fully understand the intelligence provided.

The name is released only if the official requesting it has a need to know and the "identity is necessary to understand foreign intelligence information or assess its importance," according to the Office of the Director of National Intelligence's latest report, which includes statistics on unmasking. "Additional approval by a designated NSA official is also required."

Former NSA Director Mike Rogers has said that only 20 of his employees could approve an unmasking. The names are shared only with the specific official who asked. They are not released publicly. Leaking a name, or any classified information, is illegal.

How often are names unmasked?

The number of unmasking requests began being released to the public in response to recommendations in 2014 from the Privacy and Civil Liberties Oversight Board.

There were 9,217 unmasking requests in the 12-month period between September 2015 and August 2016, the first period in which numbers are publicly available. The period was during the latter years of the Obama administration.

Why would Obama officials be looking at the ambassador's conversations?

It's not unusual for the U.S. government to use intelligence collected from foreigners to get a sense of how other countries view the administration.

Also, at the end of the Obama administration, the FBI and the NSA were looking into Russian meddling in the 2016 presidential election. One aim of the probe was to find out whether any Trump associates had colluded with Russia to help Trump get elected.

Because of that review, intelligence agencies were generating more reports that were shared with senior Obama officials.

Why is this issue being discussed in the news now?

Trump and his supporters have made the unmasking of Flynn one of their major talking points and discussions of it have become a fixture on conservative media. They claim it proves that Obama administration unfairly - and maybe illegally - targeted Flynn and other Trump associates.

But there's no evidence the unmasking of Flynn was illegal. The memo released by the Republican senators notes that it was approved through the NSA's "standard process."

Democrats see the unmasking issue as aimed at energizing Trump's base at a time when the president's response to COVID-19 has been called into question and he faces the prospect of running for reelection with the worst economy since the Great Depression.

The role of Grenell, the acting director of national intelligence and a Trump loyalist, in declassifying the names of Obama officials who had unmasked Flynn, will likely add to criticism that Trump has bent nonpartisan national security agencies to serve him politically. The decision follows the Justice Department's move to drop charges against Flynn, who had pleaded guilty to lying to the FBI about his contact with the Russian ambassador.
Report a correction or typo
Related topics:
politicsu.s. & worldpresident donald trumpmichael flynnbarack obama
MICHAEL FLYNN 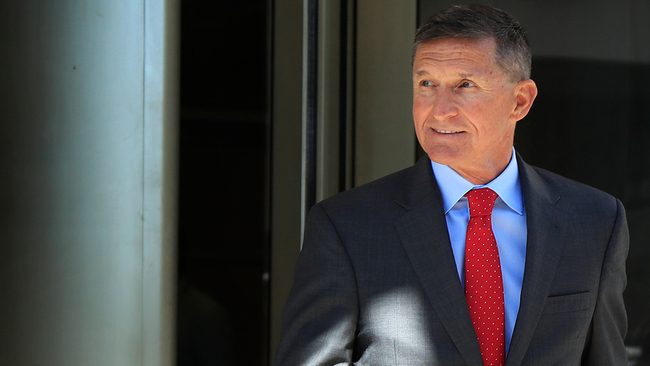