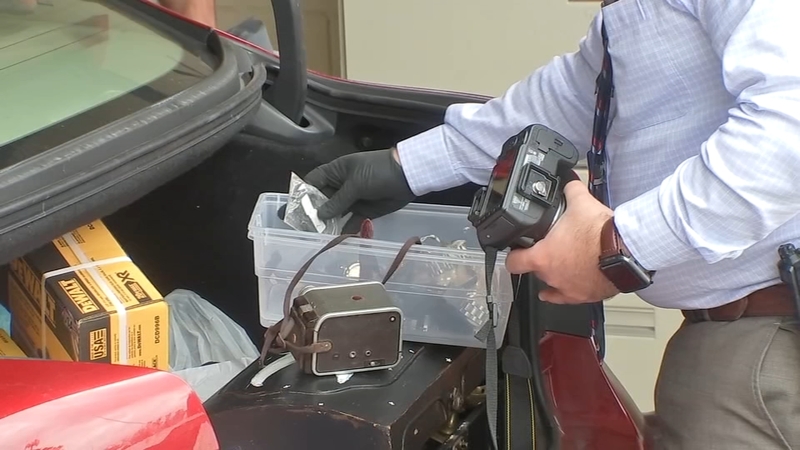 They've installed automated license plate readers, or ALPRs, which pick up hits on stolen vehicles listed in the state and national database. Often times, the suspects in the stolen vehicle cases are tied to other crimes as well.

On Thursday, MVPD officers went through a Lexus they recovered, which was listed as stolen.

They found jewelry, watches, packages and bolt cutters inside. They stopped after one of the ALPRs got a hit on a plate.

"We were alerted to an automatic license plate reader that confirmed a stolen vehicle out of Houston and, basically, when that happens, we bring officers to saturate that area to start to looking for that vehicle," said Sgt. Baker with MVPD.

There are 20 ALPRs across Memorial Villages' seven and half sq. mile area. The readers capture images of license plates.

"It's reading the license plate and checking it against the state and national database of stolen vehicles, wanted vehicles and stolen license plates. It's not taking a picture of the driver. It just tells us when a hit occurs," said MVPD Chief Ray Schultz.

Since the cameras were installed in September, officers have recovered at least 23 stolen vehicles.

"More than half the cars that we're recovering are involved in other criminal activity. We've had armed robbers in stolen cars. We've had two pretty significant identity theft rings," said Schultz.

In fact, Schultz says on Wednesday they pulled over a driver in a stolen van. Inside, they found five middle school students who allegedly stole it in a violent carjacking.

"The primary goal is to create an investigative tool for our detectives. It's created a heck of an investigative tool, not just for stolen cars and people who come into the Villages to commit crimes, but tentacles that go in different directions throughout the state," said Schultz.