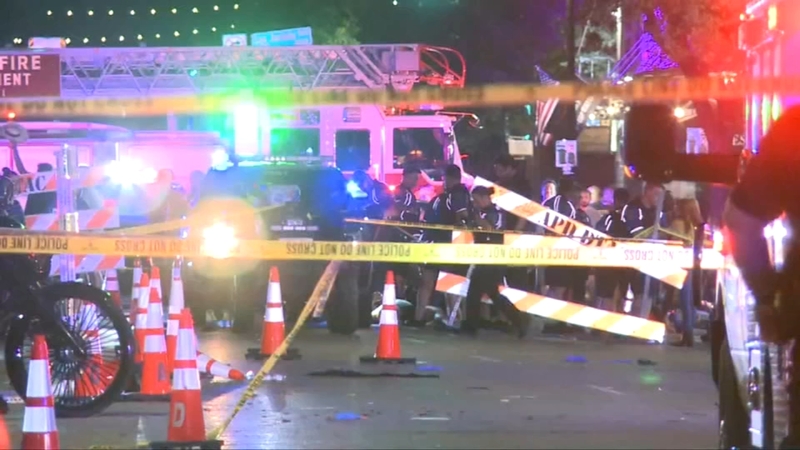 According to the Austin Police Department, 17-year-old Jeremiah Roshaun Leland James Tabb was arrested in Killeen while he was enrolled in a summer school class.

He's been charged as an adult for aggravated assault.

The first suspect, who was only identified as a male, was taken into custody over the weekend.

Officials identified the shooting victim who died as 25-year-old Douglas John Kantor and said he succumbed to his injuries at a local hospital on Sunday afternoon.

Kantor, originally from Airmont, New York, had been living in Michigan after earning a bachelor's degree in computer engineering from Michigan State University. He attended the University of Michigan-Dearborn and received his master's degree in business.

According to his family, Kantor worked at Ford and advanced in the IT department there as a product manager. He'd also bought his first house and was looking forward to marrying his high school sweetheart of 10 years.

Below is the Kantor family's full statement:

Doug J Kantor originally from Airmont NY had recently been living in Michigan after completing 4 years in Michigan State in computer engineering. Soon after getting his bachelors degree he was employed with the Ford Motor Company. While continuing his education at the University of Michigan he bought his first house and received his Masters Degree in business. He motivated everyone he came in contact with, was a team player and advanced quickly in the IT department at Ford working as a product manager. He also developed a website for his brother and fathers Air Conditioning & Heating business. He was looking forward to marrying his high school sweetheart of 10 years and starting a family. He was loved by all who knew him and had an infectious smile that would light up any room. He was loved by his family, friends and everyone who met him. This senseless tragedy has put an end to all his dreams.

"I remember Douglas as a wonderful man. He just got his master's. He had so much living to do, and my heart and my love goes out to his family," said neighbor Karen Daniels, who said she has lived next door to Kantor's family for 30 years.

Daniels said Kantor was in Austin celebrating, but she didn't know exactly what, and that she learned about the shooting through Kantor's mother.

"I was in shock that he was shot... I started crying when she told me he was in critical condition," Daniels described. "I called my daughters and we all ... You're going to make me cry... We had all been praying for him. He unfortunately passed away today, so I let my daughters know. They're all crying."

The gunfire erupted just before 1:30 a.m. along 6th Street, a popular area filled with bars and restaurants. Most, if not all of the victims were believed to be innocent bystanders, but investigators continue to review surveillance video of the area.

At the time, the street was barricaded to keep out vehicle traffic, Interim Austin Police Chief Joseph Chacon said.

"Our officers responded very quickly," Chacon said. "They were able to immediately begin life-saving measures for many of these patients, including applications of tourniquets; applications of chest seals."

Some officers drove patients to the hospital because of how chaotic the shooting scene was. Chacon said it became hard to contain the crowd and get ambulances to the wounded.

Travis Young was inside his apartment building on 6th Street when he heard the gunshots.

"By the second gunshot, I was already on the floor," Young said. "Popped up about 30 to 40 seconds later, and you saw bodies everywhere. People were screaming. People in pain."

Houston resident Fred Plummer said he was in Austin for an annual bike rally and returned to the scene of the shooting Saturday afternoon.

Plummer said he had left just moments before gunfire erupted earlier in the day.
"People were texting me asking if I was okay because they knew I was in the area," Plummer said. "I had to say my prayers again. I was really grateful that whatever it was, moved me to leave. It's, you know, it's sad."

The case is ongoing and under investigation.

Police said they encourage anyone in the community seeking support as a result of the shooting to contact Austin Police Department Victim Services at 512-974-5037. Detectives are asking anyone with information or video of the incident to call APD Homicide at 512-974-TIPS.