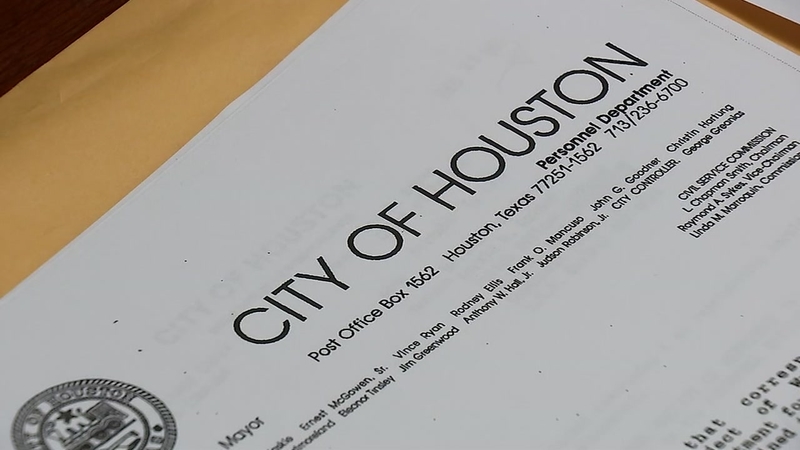 What personnel files say about Officer involved in deadly raid

HOUSTON, Texas (KTRK) -- The Houston police officer at the center of the deadly drug raid last month was praised for his use of confidential informants and productivity, according to city personnel records obtained by Eyewitness News.

Gerald Goines, 54, remains hospitalized with a gunshot wound to his face. Three other officers were also shot, and homeowners Dennis Tuttle and Rhoghena Nicholas were killed after police officers broke down their door on Harding Street with a "no-knock" warrant. HPD has said the couple fired at the officers. Goines has now been accused of lying on an affidavit to get the search warrant.

In a review by Eyewitness News of his City of Houston personnel records, Goines was often praised and his performance was rated highly.

Since becoming a narcotics officer in 1993, Goines had 50 reviews. For four years straight between 2007 and 2011, his supervisor wrote he "utilizes confidential informants to a positive end."

In the botched drug raid, investigators believe there was never a confidential informant who bought drugs at the Harding house, as Goines swore in a search warrant.

In Goines' 288-page file, there are more than 30 commendations for professionalism and good work over his 34 years with HPD. There are also six sustained complaints. Five led to written reprimands, including one for which he did not tag crack cocaine as evidence until a month later and only when he was asked about it. For the sixth, he got a one-day suspension for attacking a man his sister said sexually assaulted her. The police chief at the time wrote Goines "didn't use sound judgement."

What's missing in the pages is any mention of past shootings or prior problematic drug raids, some of which have been subjects of lawsuits. According to lawyers familiar with civil service complaints, the absence means the complaints were not sustained and HPD cleared Goines of wrongdoing.

Goines' last review in August called him a "mentor to new narcotics investigators" while also saying he needed to "increase his productivity levels." His attorney hopes he gets a fair shake.

"He's heartbroken by the way this situation has played out publicly. What he has hoped and what we have hoped for is a neutral and independent, thorough investigation into the circumstances of this warrant and these shootings," said Nicole Deborde, Goines' defense attorney.

Goines was relieved of duty over the weekend.