SAIC inspiring the next generation of space explorers 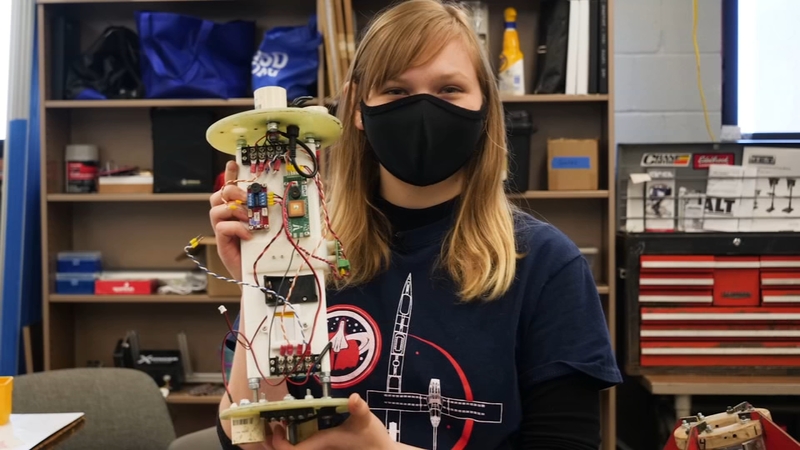 SAIC inspires next generation of explorers

HOUSTON, Texas (KTRK) -- The age of commercial spaceflight is here, the next giant leap forward for the future of space travel.

"Some people talk about, when I was a kid I saw men walking on the moon," said University of Houston student Emily Humble. "For me, it was seeing those SpaceX boosters landing. It was like something out of science fiction."

She may only be in college, but she has already had the opportunity to work with NASA, developing simulation tools to assess recovery times for crew capsules in abort scenarios. Even as early as high school, she was learning to build and launch rockets. Both incredible experiences, supported by leading technology company SAIC, Space Applications International Corporation.

"We have a long legacy of supporting NASA and U.S. space missions, and particularly work with the Johnson Space Center," said SAIC External Relations Director Joyce Abbey. "SAIC is particularly proud to give back to the communities we work and live in."

One of the biggest ways SAIC gives back is by supporting STEM outreach programs that inspire future generations of space explorers. SystemsGo is one of them.

"When I was in high school, I was involved in a program called SystemsGo," said Humble. "That is a program that helps high school students learn about rocketry."

It was the SystemsGo program at Kingwood Park High that helped fuel her love for aeroscience.

"At that point in my life I wasn't sure if I was going to pursue STEM," said Humble. "But it was really that program that made me feel confident in that field."

But perhaps the most anticipated experience happens senior year, when students can travel to White Sands Missile Range in New Mexico, where the Air Force launches their biggest rockets yet.

"Some schools have actually participated to develop a rocket that carries a research payload to the very edge of space. 100-thousand feet," said Abbey.

For Humble, the thrill of liftoff didn't end with SystemsGo. This year, SAIC gave her another opportunity to intern with NASA's Commercial Crew program. She spent the summer developing a simulation tool used in abort scenarios.

"It is a part of helping NASA and Spacex and Boeing assess whether what they're doing is safe," said Humble. "If something goes wrong, it can have really dire consequences. In the event that we have an emergency, we want to make sure that we can get the astronauts back safely."

It's an experience that will be invaluable in her future career.

"I am the project manager for the rocket team. I would love to work in the aerospace field," said Humble. "But I'm also interested in nuclear physics. Nuclear engineering is something I'm exploring."

But SAIC doesn't just help students learn more about STEM fields, it brings teachers to the forefront of space science, too. Through the aerospace teacher extern program, SAIC selects teach to go behind the scenes at Johnson Space Center, spending a week learning all about human spaceflight.

May Murani, who teaches technology applications in Pasadena ISD, was one of those lucky teachers.

"I was thrilled beyond my imagination," said Murani. "When we got into the program, we went through workshops and met people, which included so many scientists and the people behind Hubble Telescope, Also, we were able to talk to different astronauts, look at their profiles, and be able to learn from them. We went to Lockheed Martin, where we could go see how the food is prepared, how are the astronaut suits prepared, all of that."

"They spend 40 hours immersed in all the work being done to support human space exploration," said Abbey. "Then they go back to their classrooms, energized and invigorated, developing lesson plans to then inspire their students."

"As an educator, I think it was sort my responsibility to be able to absorb as much as I could and then bring it down to 5th grade or 6th grade level," said Murani.

For her, seeing her students at DeZavala Middle School get excited about technology and science is the most rewarding part of her job.

"The students are so, so excited," she said. "I try to connect whatever I've learned from my extern program. 3D printing for example, coding for example. We recently looked at the launch, the SpaceX Crew Dragon. They were completely into that."

Her passion for her students' success is unmistakable.

"We have kids here who may not have the resources. They may not even understand English," Murani said. "Spanish or any other language could be the first language. But that doesn't make them any less. I can relate to it because before moving to the United States, English was not my first language either. I used to dream of things as a kid that I never imagined would be possible. If I can do that, there's a brilliant world just waiting for them."
Report a correction or typo
Related topics:
educationhoustonrocket launchspacexeducationhigh schoolspacesaicjohnson space center
Sponsored Content
Copyright © 2022 KTRK-TV. All Rights Reserved.
SAIC
SPONSORED: See how Houstonians do the Holidays! Watch the Localish Houston Special sponsored by SAIC
SPONSORED: Relive the moment: Watch SpaceX Crew Dragon launch