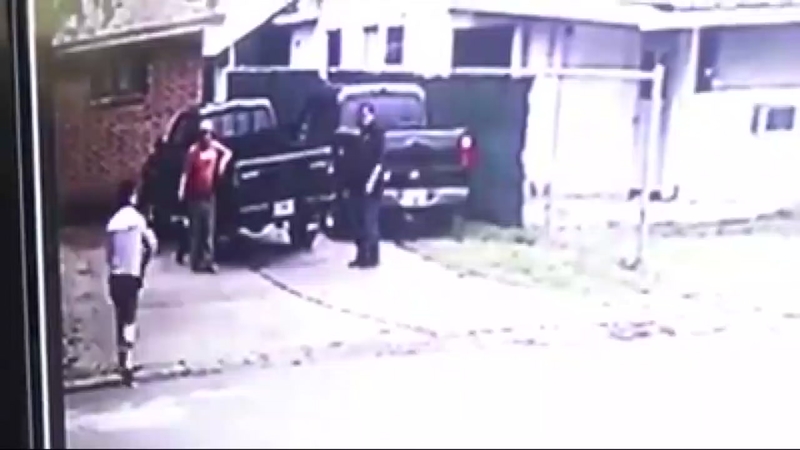 HOUSTON, Texas (KTRK) -- A foiled Monday morning armed robbery that was caught on camera has shaken up a north Houston neighborhood.

"A car came from this side and then just turned and parked in front of my house," said Marisol Diaz, the daughter of one of the victims. "He parked right in my driveway and he walked up to my dad and Pedro, the next door neighbor."

A man can be seen on surveillance video pulling up to the curb, getting out of the car and looking around as he walks up to two men, Diaz' father, Dolores, and Pedro. Both were standing in Dolores' driveway.

The two men can be seen motioning to the suspect and pointing as they tried to help him with directions.

Moments later, the suspect is seen reaching into his pocket as he pulls out a gun and points it right at Pedro.

Dolores can be seen turning and running toward his front door as the gunman follows after him. The two men are out of view from the cameras for a few seconds before the suspect can be seen running back to the car. A second man was also captured jumping into the driver's seat of the getaway car.

"When my dad ran inside, we don't know why he ran inside, because (the suspect) literally could have shot my dad in the back," Diaz said.

The woman said her father slammed the suspect's fingers in the metal gate outside his front door, which he believes caused the gunman to run away.

Diaz was inside her home when everything happened and said she ran outside when she heard gunshots. The woman believes the suspects fired their weapons after fleeing from the scene, possibly trying to scare anyone who attempted to follow them.

"They were still outside and they were in a panic," Dias said. "I mean, Pedro couldn't literally move. He couldn't talk. My dad was so nervous."

The Houston Police Department tells Eyewitness News they believe the vehicle caught on camera is a gold Honda Accord with a paper license plate. Investigators are looking into the incident and are also taking a look at security camera footage.

"It's very sick, but I really really really pray for them because they are super young boys and they're putting their own lives in a big risk," Dias said. "My dad didn't have any weapons at the time, but somebody can come out with a weapon and they can get shot right on the property."

Anyone with information is urged to contact Crime Stoppers at (713) 222-TIPS.