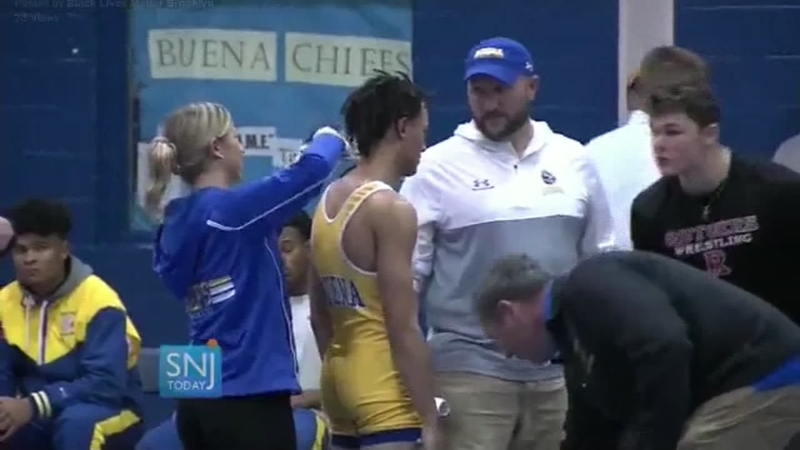 Referee forces wrestler to cut off dreadlocks before match

NEW JERSEY -- An Olympic champion wrestler has reached out to a New Jersey high school wrestler who had his dreadlocks cut off minutes before his match after a referee told him to lose the hairstyle or forfeit his bout.

Jordan Burroughs, a 2012 Olympic gold medalist and four-time world champion, posted and spoke on social media early Saturday about the incident Wednesday at the Buena Regional High School match, saying he had never seen anything like it in a quarter-century of wrestling.

"This is nonsense," a message on Burroughs' twitter account said. "My opinion is that this was a combination of an abuse of power, racism, and just plain negligence." In a video posted on Instagram, he criticized parents and coaching staff at the match for not intervening, calling it "absolutely shameful."

High school wrestler Andrew Johnson, who is black, had a cover over his hair, but referee Alan Maloney, who is white, said that wouldn't do. Johnson went on to win Wednesday's match but appeared visibly distraught.

Burroughs drew attention to his demeanor, saying, "He was hurting, and that wasn't fair."

Burroughs called Johnson "courageous" for his performance in the match despite "all of the adversity and racism that you were facing in the moment" and said he understood his reasons for agreeing to the haircut, although it might have been "more powerful" to walk away.

Michael Cherenson, spokesman for the New Jersey State Interscholastic Athletic Association, said Saturday the organization had reached out to leagues and conferences that assign referees "and they've all agreed" not to assign Maloney to any event until the matter has been reviewed.

The state attorney general's office has confirmed an investigation by the Division on Civil Rights. The school superintendent said in a letter to the community that they support and stand by all student athletes.

Maloney came under fire in 2016 for using a racial slur against a black referee, according to the Courier Post newspaper. Maloney told the newspaper he did not remember making the comments. After the incident was reported, he agreed to participate in sensitivity training and an alcohol awareness program. A one-year suspension was overturned.

A woman answering the phone at a listed number for Maloney said the ordeal is being blown out of proportion and the referee was simply following rules.

Burroughs also said he hoped to be in touch with Johnson soon and promised to send him "a few cool things for Christmas."
Report a correction or typo
Related topics:
sportsnew jerseywrestlinghairu.s. & world
Copyright © 2021 by The Associated Press. All Rights Reserved.
TOP STORIES
Wrong-way driver killed in fiery crash with 18-wheeler on I-45
Man found shot to death in his car along North Fwy at I-10
Man accused of attacking 3 women at same Houston apartments
LOOKING BACK: Remembering the collapse of Enron
Dense fog could slow down your Thursday morning commute
Texas' ban on mask mandates in public schools back in place
MLB owners lock out players, 1st work stoppage since 1995
Show More
Houston hospital system days away from losing Medicare contract
Houston parents duped by deceptive Elf on The Shelf seller
1st case of omicron COVID variant identified in US
Neighbor shot by former Sugar Land officer may face assault charge
Charities say rising costs mean less donations for children
More TOP STORIES News