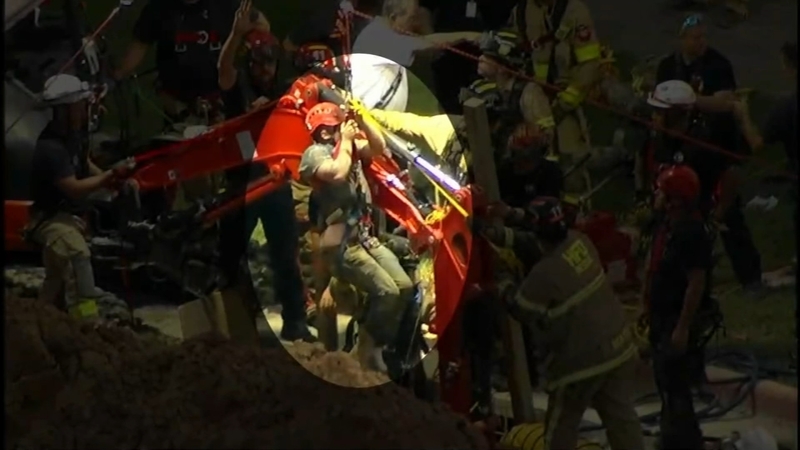 SPRING, Texas (KTRK) -- After more than 5 hours trapped 12 to 15 feet down, a man was freed from a trench that collapsed on him in the Spring area, and was flown to the hospital.

According to Mike Gosselin with Klein Volunteer Fire Department, the man was doing utility work in a parking lot adjacent to Gleannloch Pines Golf Course along Champion Forest.

For some reason, when he went down into the hole around 2:45 p.m., the dirt caved in on him. At one point, he was covered chest-deep, Gosselin said.

"It's very complex underneath that parking lot. It's like a cavern. There's clay and dirt all piled on him, basically buried in a cone," Gosselin explained. "As we tried to dig him out, what slowed us down at the very end was his foot was still buried in the cone and his boot had filled up with dirt and clay, and he was stuck by his ankle. Little by little, piece by piece, we got him out, and we didn't want to hurt him, but finally we got him completely free and hoisted him out."

Firefighters with Klein, Spring, The Woodlands, and Houston Fire Departments responded. They hoisted him up around 8:20 p.m. using a ladder truck positioned over the hole.

Fire officials say the man never lost consciousness, but did complain of leg cramps. He was also joking with rescuers to pass the time.

He was flown to the hospital for evaluation, but Gosselin said he appeared to be doing well.

"They are awesome," said resident Aberna Jeyachandran, of the firefighters.