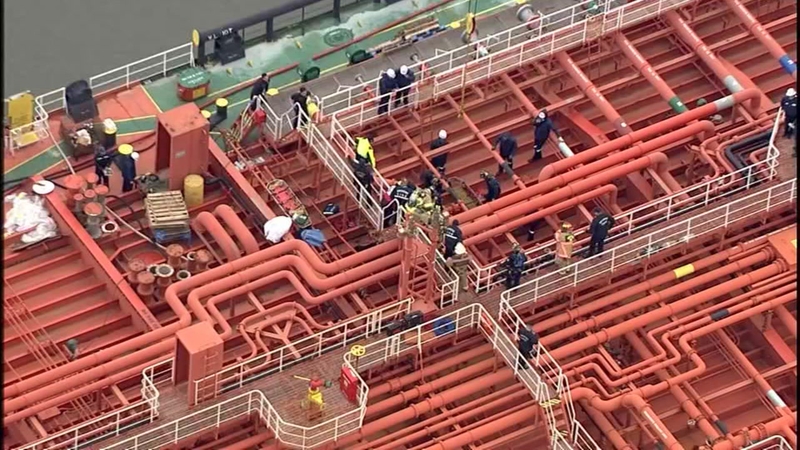 Worker knocked out by fermented molasses in cargo ship

HOUSTON, Texas (KTRK) -- A worker had a close call when fermented molasses created a hazardous environment in the cargo hold of a ship.

At about 9:30 a.m. Thursday, Houston firefighters were called to rescue a trapped victim in the ship's hold, docked at the Port of Houston.

According to HFD, the cargo hold 75 feet down the ship contained molasses which had started to ferment, causing a hazardous environment and rendering the worker unconscious.

Members of the Port of Houston Fire Department entered the container with protective gear and brought the worker to safety.

The enclosed space of the cargo hold presented difficulty for rescue crews and their equipment to get to the fallen worker.

"In this particular case, the cover to the hatch the gentleman was down was probably about the size of a manhole cover. So very, very tight, and you have to have very specialized gear to get down there," said Capt. Marcus Woodring, Port of Houston chief officer of Health, Safety, Security and Emergency Management.

Officials explained the molasses on the ship is food grade, used in products from baked beans to cookies. It can ferment after sitting and exposure to certain temperatures.

Buck added some of their equipment can't be cleaned and will have to be thrown away.

The victim regained consciousness and was taken to a nearby hospital.

Port firefighters said they are trained to deal with any kind of material they could encounter at any minute, even molasses on a freezing cold morning.

"When something like this happens on a day when there's a freeze warning in the morning until 10, we know we can operate at that peak level of efficiency with the equipment we have in order to be able to make a difference in someone's life," said Sr. Captain Stan Kozlowski.