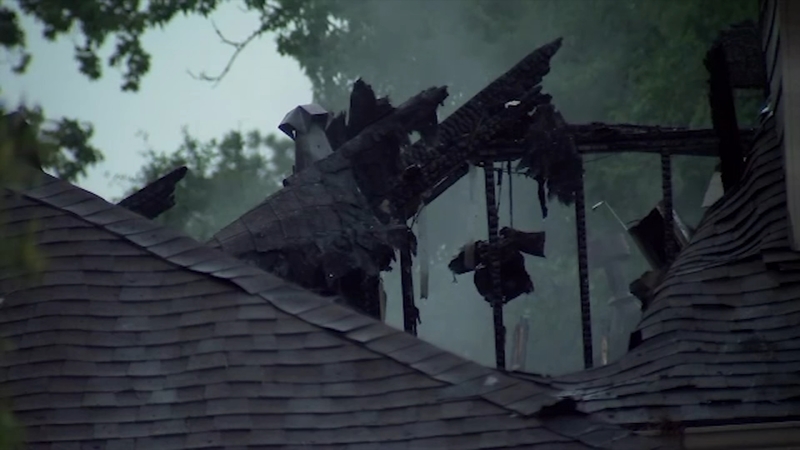 THE WOODLANDS, Texas (KTRK) -- Firefighters responded to a house in The Woodlands that caught on fire after being struck by lightning on Sunday evening.

Around 5:45 p.m., a fire started in the attic of a home near Etonshire Court in Shenandoah and flames went up through the roof, according to The Woodlands Fire Department.

Woodlands home struck by lightning. Fire ravages home leaving it without a roof. Family is safe, optimistic, and thankful for The Woodlands Fire rescue for swift response and action. Report on @abc13houston at 9pm pic.twitter.com/v3YjDksSQB

According to officials, the fire started after severe weather in the area caused a lightning strike to hit the home. They also said this home was just one of many houses affected by the storms in the area.

Firefighters said the family inside the home smelled smoke after they heard the loud lightning strike and came outside to see their home burning.

They initially tried to extinguish the flames from the inside, but then switched to quelling the blaze from the outside.

Officials are not sure if the family will be able to return to their home.
Report a correction or typo
Related topics:
the woodlandsthunderstormbuilding firefire departmentsfirelightningweekend weatherhouse firefirefighterssevere weather
Copyright © 2021 KTRK-TV. All Rights Reserved.
TOP STORIES
ZZ Top bassist Dusty Hill dies at 72
Houston restaurant is ode to ZZ Top and iconic music
Man accused in 1983 murder of woman dies of natural causes in jail
100,000 pounds of acetic acid released in deadly La Porte incident
Acetic acid explained: What it is and how it's used
Scattered rain possible Wednesday, another summer front on the way
Texas deputy AG on Biles' withdrawal: 'A national embarrassment'
Show More
2 Port of Houston terminals closed after 'hardware failure'
FedEx mass shooter wanted to 'demonstrate his masculinity': FBI
You can apply for $1,500 in COVID relief money today
ABC13 town hall to address Texas' rising COVID-19 infection rate
Man jumps out of car and screams at woman in road rage incident
More TOP STORIES News