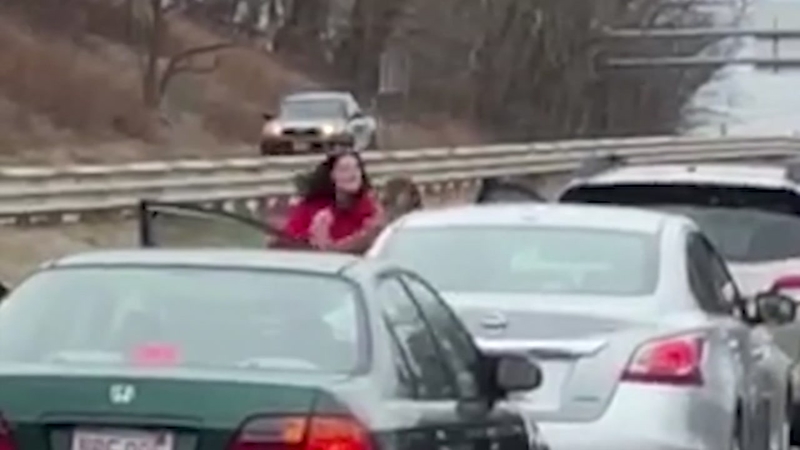 "Fists were flying, you know, and they just got into a fight," a witness explained.

State police say the incident started when one woman cut off the other during rush hour traffic.

"In the middle of the highway, too, that's what, like, threw me off. I was like, 'Is this really going on?'" a witness said.

Stunned drivers recorded the confrontation as the two women brawled in the middle lanes.

"This could have gone south and been very dangerous," Danvers station commander Lt. Michael Harvey said.

Luckily, neither of the women were injured, but police are now considering charges.

"There are ways to settle disputes. It doesn't have to be in the middle of the highway," Lt. Harvey said.

State police reached out to one of the women involved in the altercation, and now are waiting to question the other.
Report a correction or typo
Related topics:
massachusettsfightbrawlu.s. & worldtrafficroad rage
Copyright © 2022 KTRK-TV. All Rights Reserved.
TOP STORIES
3rd monkeypox case confirmed in Houston area, officials say
There are many ways to eat healthy amid high food prices, experts say
Biden signs landmark gun measure, says 'lives will be saved'
A hot weekend ahead of more widespread rain chances next week
Bank of America apologizes to refugee family for account mix-up
6 people killed over span of 12 hours in isolated incidents in Houston
Love the outdoors? Galveston Island State Park is reopening
Show More
Astros' 2nd time ever to no-hit NY
Houston Pride 2022: Where and how to celebrate
Teenage daughter stabs father during fight in SW Houston, police say
17-year-old charged with murder after giving friend ride
Settlement would forgive $6B for defrauded college students
More TOP STORIES News