Caught on camera: Woman stripped and assaulted in Fresno 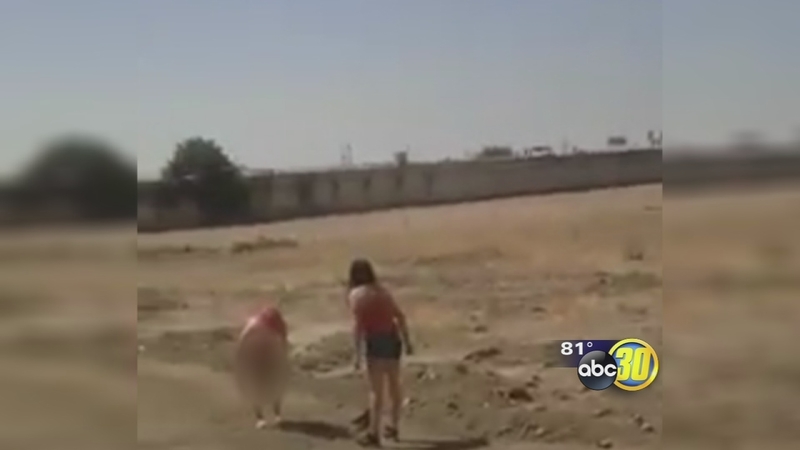 FRESNO, CA -- A woman was stripped, beaten and chased down the street. The humiliating crime was recorded then posted to social media.

Right now police want the public's help finding the people in the video.

Fresno Police Chief Jerry Dyer says it will take some work to track down the suspects, but his gang officers are after them.

The laughter heard in the video is almost haunting after you see what the people do to the 20-year-old victim.

In one clip you see a woman in a red tank-top punch and swing at her as she's forced to take off her clothes in an open field in the middle of the day.

"All during the time that you have individuals which are part of the bulldog gang barking at her," Chief Dyer said.

Dyer is disturbed watching the video, he said, especially since the attackers and bystanders recorded it and then posted it to Facebook instead of trying to stop the attack.

"We're going to be continuing to pursue this case," he said. "But we need people to come forth with information in this case."

At one point the victim is begging to be left alone, and a man walks right by the naked woman, without offering help.

Later in the video the victim is seen running from the woman attacking her while still naked, passing by several apartment complexes, and no one calls 911.

Dyer says even the victim is offering little help right now. "When people go through that kind of situation, they're not as likely to provide as much information as we'd like," he said. "But that's normal somebody that's been victimized to that degree. So we're continuing to work with her."

Here's where the public can help, police need to track down who they say is the main aggressor. Her street name is "Baby Dreamer." Her real name is unknown right now. But police say her crime is clear.

They also need help finding the other people in the video, like a guy in a red shirt who appears to be recording the assault as well.

This assault happened Saturday in a Central Fresno field. The video was posted just a short time later. It has since been removed from Facebook and is now in the hands of investigators.

One of the clips was recorded on a tablet that police recovered with a search warrant because of the Facebook post. It was posted by a teenager. Chief Dyer says in addition to tracking down and charging the four suspects they're working to see if that teen could face criminal charges.
Related topics:
social mediau.s. & worldcaught on camera
Copyright © 2022 KFSN-TV. All Rights Reserved.
TOP STORIES
Harris Co. judge accused of unlawfully arresting former TV journalist
HPD responds to reports of threat at Ben Taub hospital, police say
Gulf disturbance up to a 40% chance of development
81-year-old missing for nearly week in need of medication, family says
50 migrants die after 18-wheeler abandoned in Texas heat
A glance at migrant smuggling deaths globally since 2000
Abortions before 6 weeks allowed to resume in Texas after court order
Show More
The Alley Theatre to be renamed after receiving anonymous $25M grant
Major crash blocks all lanes of SH 35, south of FM 518 in Pearland
Advocates believe migrants dead in 18-wheeler were headed to Houston
Epstein associate Ghislaine Maxwell sentenced to 20 years in prison
Grandmother of Uvalde school shooter released from hospital
More TOP STORIES News