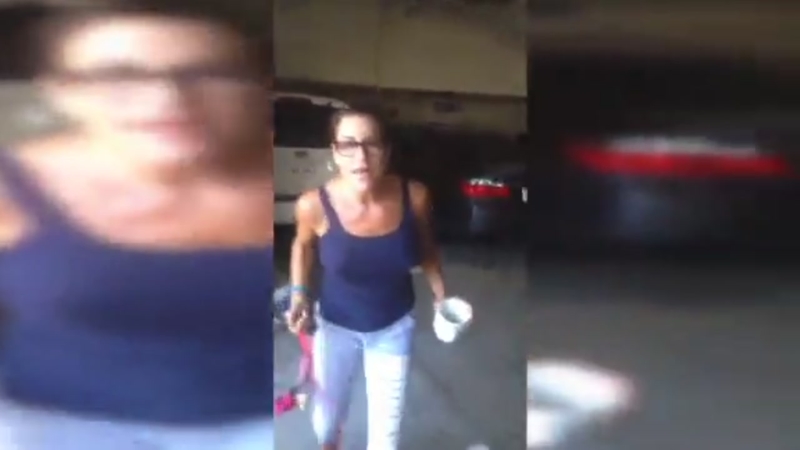 A California woman seen throwing coffee on a worker denies being a racist.

LOS ANGELES, California -- A woman at the heat of a controversial confrontation captured on video is speaking out on the incident.

Rhonda Polon is seen in a video tossing coffee at a contractor after he and a co-worker tried to enter her property.

"I'm not a racist," Polon told KTLA. "None of those things have ever come out of my mouth. I may have a temper at some points, but I am not a racist person."

Polon says she does not condone her actions in the viral social media video.

She tearfully apologized for her act of throwing coffee in the face of a Latino worker during the Aug. 4 confrontation.

The worker said he had arrived at the upscale condominium complex to do work requested by one of the owners.

"She was calling us wetbacks and that we were probably there just to steal their stuff," Miguel Sanchez said.

Polon claims she questioned Sanchez and his co-worker, who were trying to gain access to the building, due to recent burglaries in her garage.

Things quickly escalated when Sanchez said he showed Polon the garage opener and keys he received from the owner and it led to the coffee toss in the face.

Sanchez called LAPD but Polon said it was done in self-defense.

"I didn't think about it, I just reacted. I was trying to protect myself," she said.

Police told Sanchez he had a right to request a private person arrest but declined to do so since he was not seriously injured.

After a serious of threats and even a protest, Polon denied using any racial remark and says she wants to set the record straight, that she never meant any harm.