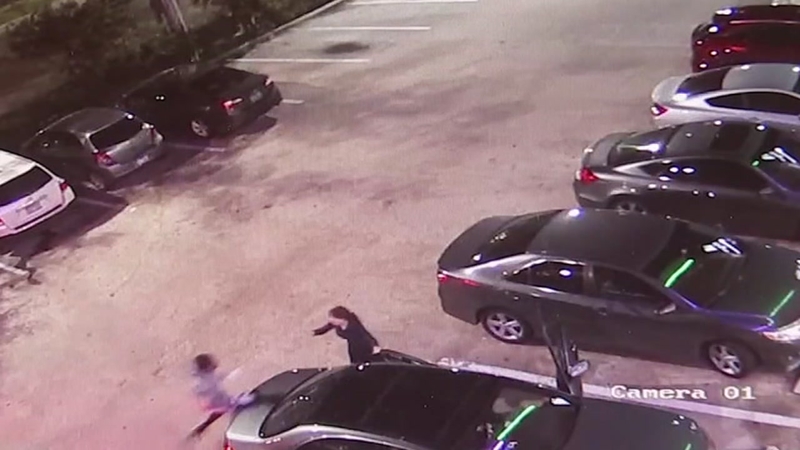 Just after 9 p.m. on Sept. 4, a robbery suspect got out of a black car, possibly a Dodge, and made a beeline for the Mercedes parked next to the 85C Bakery Café on Bellaire Boulevard.

He is seen breaking the passenger window and trying to steal the driver's purse. The robber was unsuccessful, so he runs to the other side of the car.

On the other side of the car, the driver violently shoves one woman to the ground. He is seen on video taking one item from the car, then later drops it. The women fought back, and about a minute into the robbery, the suspect gives up, jumps back into the getaway car, and leaves.

The two women inside the car were shaken, but not seriously hurt. The video captured by the bakery spread quickly online. However, the video does not show the getaway car.

Eyewitness News obtained additional surveillance video from the shopping center, which shows the black car waiting to pounce on a victim.

"I've turned over the videos to the police, and hopefully we can catch these people," said Stephen Le, Jr., whose company, Greatland, manages the shopping center. "I think the key in all this is we need to report our crimes. As an Asian, we tend to kind of not forget, but not report it."

Le is heavily involved in the Southwest Management District, which is spending hundreds of thousands of dollars in security in the areas surrounding Chinatown.

"The Chinese community tends to be targeted sometimes, because they're known for carrying cash and not being willing to report those types of issues," said Brian Burks, the director of security for the management district.

The district has extensive camera networks set up through Chinatown, which has helped apprehend some suspects. They are also working with community members, urging them to report crimes and speak out.

If you think you recognize the 85C Bakery Cafe suspects, you are urged to call Houston police.