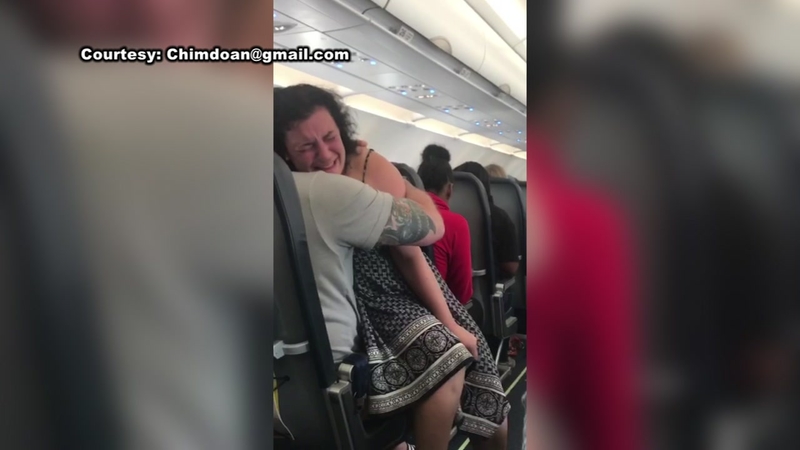 HOUSTON, Texas (KTRK) -- A woman was taken off a Spirit Airlines flight from Houston after she had a mid-flight meltdown.

This may be the most intense video you will see all day.

During the intense one-minute, 20-second video, the woman curses, makes threats involving her brothers, and acts erratically before a plane full of stunned passengers.

A passenger told ABC13 people were pretty upset after a woman's outburst on a Spirit Airlines flight.

At one point, when a male passenger stands up to block the woman from getting to the front of the plane, she shakes her fist at the man before lashing out again.

"Do you know who my brothers are? They are f***ing Marine snipers. Do you want to f*** with a f***ing Marine?" she screams, before pushing her way toward the cockpit.

In the video, passengers can be heard praying, consoling each other, some audibly in distress by the unsettling incident.
"Do you want to know what hell is? I've (expletive) been there 10 (expletive) times!" the woman continues to shout.

According to authorities, the woman became irate after the flight landed in Rochester, Minnesota, due to a medical issue.

A passenger who became ill was taken off the aircraft before the outburst. She was taken into custody, screaming while being escorted off by police.

It was not immediately known if the woman had any relation to the sick passenger.

Woman detained after outburst on Spirit flight from Houston

Spirit Airlines released the following statement to ABC13 about the incident:

Yesterday morning, a flight from Houston to Minneapolis had to land in Rochester, Minnesota due to a guest experiencing a medical emergency. On the ground in Rochester, another passenger became erratic and irate and was removed from the aircraft with the assistance of law enforcement. We apologize to our guests who had to witness this and for the inconvenience of the delay. Safety is our top priority at Spirit Airlines.
Report a correction or typo
Related topics:
houstonflight emergencyu.s. & world
Copyright © 2022 KTRK-TV. All Rights Reserved.
TOP STORIES
H-E-B's Scott McClelland to step down as company president
At-home COVID-19 test request website goes live 1 day early
Big warm-up sets up midweek cold front
Emergency closure at W. Houston interchange to cause delays
HISD to stay closed through Tuesday due to rise in COVID cases
Cody Johnson named this year's rodeo parade grand marshal
AT&T says it will delay some 5G after airlines raise alarms
Show More
Child as young as 1 among several hurt in shootings that killed 6
Man and female suspect killed in botched robbery in east Houston
Kilometer-wide asteroid will make its closest pass by Earth this week
'No end in sight:' Texas abortion clinics dealt new setback
Deputies fatally shoot suspect from deadly Cracker Barrel shooting
More TOP STORIES News