Student with cerebral palsy allegedly beaten on his birthday at school after argument, mom claims

A Willis mom says school officials gave the accused student a "slap on the wrist," so she decided to press charges.
KTRK
By Brooke Taylor 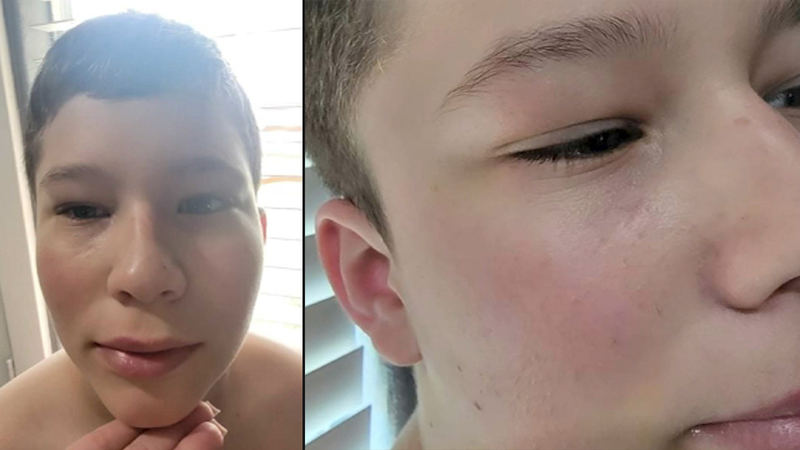 Mom files complaint against another student after son's fight

WILLIS, Texas (KTRK) -- A mother in Willis is filing a complaint against a student after her son with cerebral palsy was allegedly pinned down and beaten in the face at school.

Courteney Brennan said she got a phone call from Brabham Middle School on Sept. 1, which happened to be the same day as her son's 13th birthday.

"The vice-principal told me another student jumped on top of him, and he was hit excessively in the head," Brennan said. "That's the word she used. His face started to swell on the right side. When we went to the emergency room, they took forensic photos, and there was a four-inch-wide goose egg on the side of his head."

Brennan was told the fight started over the game Minecraft. Her son, a 7th grader, was in the lunch line, listening in on a conversation that two boys, in the grade above, were having about the game.

He intervened and the three students exchanged words, causing a heated argument.

She immediately thought the worst because her son has cerebral palsy, which affects him physically and socially.

In a list of concerns, a group of parents argue the district isn't providing teachers with proper training to deal with these students.

"It's really difficult to look at your son have to live with something his whole life, and struggle, and do so well to make it where he is, physically," Brennan said. "I mean, he's had multiple surgeries on his legs, and then have to get beat down."

Brennan does not believe the school has taken the fight seriously. She says it took a while for the school to even notify her after it happened.

"One of them called me at about two o'clock, and she said it happened at lunchtime," she said. "That's about two hours after the fact."


While faced with a tough decision, Brennan decided to press charges against the student.

A mother of a child with special needs explains why she is worried about her daughter returning to school in the COVID-19 era.

"My son is one of those kids that if he would have hit him in the right spot, or hit his head hard enough, my son may have not gotten up," Brennan said. "That would have followed this child forever. I thought giving him another slap on the wrist would not make this better."

"Willis ISD takes student safety very seriously. The district is working with the school and the Montgomery County Precinct One Constables office on the investigation and is taking disciplinary action according to the student code of conduct. Because of the pending investigation and student privacy laws, we are unable to provide further details."

The case will now be referred to the Montgomery County Juvenile Prosecutor's Office.