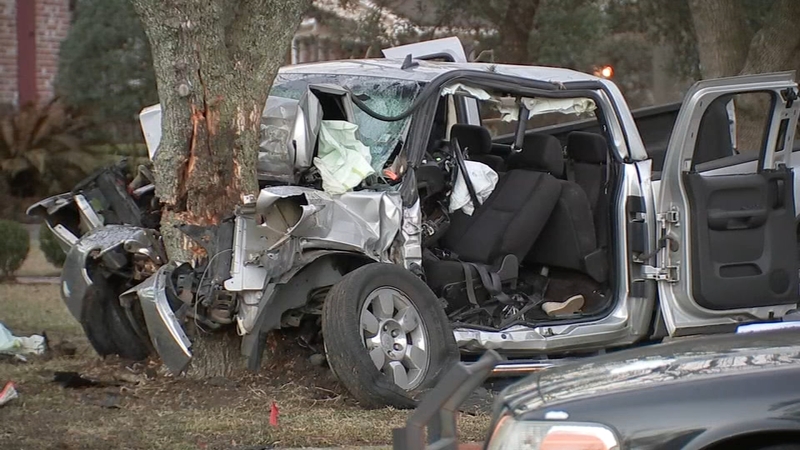 HOUSTON, Texas (KTRK) -- A woman has been arrested and charged after a DUI-related crash killed a passenger in her vehicle on Sunday morning in west Houston, according to police.

Authorities believe 29-year-old Ana Flores was the driver responsible for the crash on North Wilcrest Drive that killed a 34-year-old man.

Flores has since been charged with intoxication manslaughter.

Houston police said officials have not confirmed the identity of the victim, who they said was riding in the front seat.

The crash happened around 4:30 a.m. near Memorial.

Flores was reportedly driving a GMC Sierra southbound on Wilcrest at a high rate of speed when she left the road and crashed, according to Houston police.

The passenger died at the scene. Flores and another passenger suffered injuries and were transported to a hospital.

The driver told authorities she had been drinking at a restaurant before the crash, HPD Sgt. David Rodriguez said.

"We're still investigating the level that the alcohol played in this crash," said Sean Teare with the Harris County District Attorney's Office. "But suffice to say, typically people don't travel at that rate of speed at that time of the morning in a residential area like this, lose control and crash into a tree."

"We're working here with HPD in conjunction to kind of determine everything, not just what happened right here, but what happened beforehand," Teare said. "What led up to this tragic set of events, not just for the people in that car, but there's a family who is not going to have a loved one come back. There's a family whose house is forever changed because there's a dead body on their front lawn. All of that is preventable. That's the message that we have to get out to everyone."
Report a correction or typo
Related topics:
houstoncar crashfatal crashman killeddui crashtraffic accident
Copyright © 2022 KTRK-TV. All Rights Reserved.
FATAL CRASH
Bodycam video released in crash that killed 75-year-old
12-year-old hurt in crash with speeding tow truck that killed 2 adults
Man arrested and charged in N. Loop DWI crash that killed passenger
Driver may have been drunk in crash that killed passenger, HPD says
TOP STORIES
Man charged in cop shooting used guns with 3D printed parts: Sources
'People will lose lives' 13 Investigates explosion in 'Glock switches'
Law enforcement officers leaving departments at staggering rates
Mother loses kidney after being shot on 610 Loop
Daylight shows home destroyed after standoff with shooting suspect
Rainy Monday and arctic cold front on the way after sunny weekend
Houston residents worried about violent crime increase
Show More
New survey shows highest COVID impact on Houston workforce yet
Union Pacific addresses issue of stopped trains blocking roads
What we know about man accused of shooting 3 HPD officers
Widow delivers heart-wrenching eulogy for NYPD detective
Suspect arrested after 30-minute chase ends on I-45 in Texas City
More TOP STORIES News