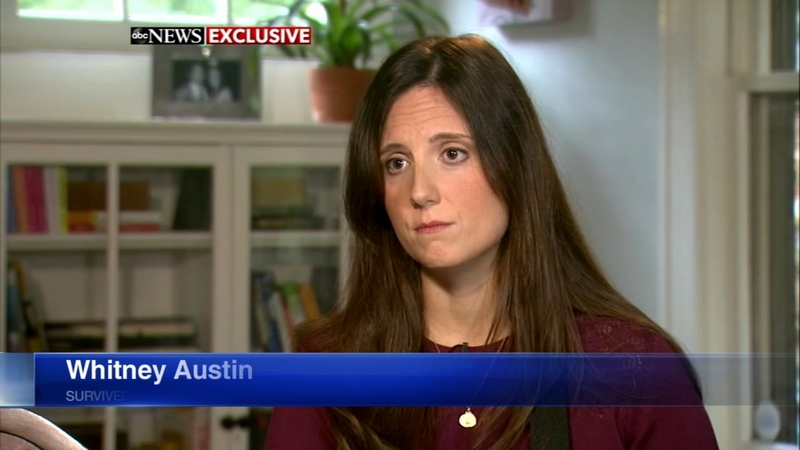 EMBED <>More Videos
CINCINNATI, Ohio -- A Cincinnati mother who was shot 12 times when a gunman opened fire inside of a bank said she played dead so that the shooter would move on.

Whitney Austin was one of the multiple people shot by 29-year-old Omar Pere on Sept. 6.

Minutes before the shooting, Austin says she was running late for work at the Fifth Third Bank headquarters. She was on a conference call as she walked toward the revolving door but never made it inside.

"Inches before the bullets hit me and it felt like a burning sensation," Austin said.

She fell to the ground and coughed up blood.

"And that's when my brain immediately went toward, 'I'm dying,' she said. "I immediately thought, 'I am going to say goodbye to my family,' and I knew I couldn't say goodbye to the kids, they were at school. I assumed he saw me move, and he shot me several more times."

She pretended to be dead until she saw a Cincinnati police officer.

"I am shouting at him, 'I have a 5 and 7 year old who need their mother. You need to save me. Come get me. Come get me.' And he's looking at me. At that point, they track him and shoot him down," Austin said.

Austin spent five days in a hospital being treated for her injuries. Three other victims and the shooter were killed.

After the attack, Austin announced her new nonprofit foundation, WhitneyStrong, which will focus on responsible gun ownership.

"This is about making sure our kids can go to school and not have to participate in active shooter drills on a weekly basis. This is so people like me can walk into their place of employment and not get shot 12 times," she said.
Report a correction or typo
Related topics:
ohiomass shooting
TOP STORIES
Coast Guard suspends search for Houston woman off Alaska coast
Child left alone starts E. Houston apartment fire
The Railroad Killer
10-month-old girl left in hot car for 'several' hours, HPD says
Known white supremacist threatening armed standoff at Texas Capitol
Katy ISD employee's husband accused of stabbing wife to death
Judge: COVID-19 asylum restrictions must continue on US-Mexico border
Show More
Track your fitness with an app? Doctors wary about certain ones
Your chance of rain is going up this weekend
Harris County Election Day process under fire by Republican Party
Woman stopped at US border with condom-wrapped fentanyl
Parents reminded they're 'rolling the dice' on kids without COVID shot
More TOP STORIES News