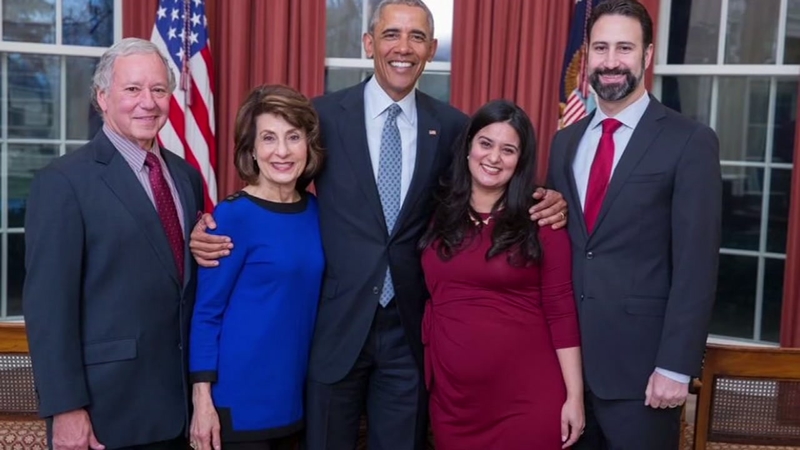 SUGAR LAND, Texas (KTRK) -- They were the young political couple whose destiny was only limited by their dreams, until cancer struck.

He was from California: the tall, handsome former athlete. She was the Texan, petite, but fiery. Michael Robertson and Sahar Wali met on the 2008 presidential campaign trail.

Both worked for then-candidate Sen. Barack Obama. Despite the long hours and crazy schedule, they fell in love, and four years later, got engaged.

"My husband was diagnosed at the age of 35, almost blindsided with stage 4 metastatic colorectal cancer," said Sahar Wali Roberson.

The couple didn't stop. They got married and their careers blossomed. Even as he was undergoing surgeries and chemotherapy, Michael, who by then had risen to a deputy Cabinet secretary at the White House, was focused on implementing the Affordable Care Act.

"Because he knew if people had the ability to purchase healthcare, their lives could be saved," said Sahar. "I think access to healthcare has been the single most important policy issue that my husband had the chance to work on in the White House."

Michael kept his cancer private, until an effort by Sen. Ted Cruz to shut down the government over the ACA spurred him to act. That's when Michael wrote an entry detailing his personal battle with cancer on the White House website.

The couple continued their work in D.C., and for a long time, Michael beat the odds. Sahar gave birth to a boy they named Wali. Then, earlier this year, the couple moved back to Sahar's hometown, Sugar Land, so Michael could get treatment at M.D. Anderson Cancer Center.

This week, Michael lost that battle. Among the many tributes that flooded Facebook, one stood out. Michael had worked for former President Barack Obama for 13 years, starting in his state senator office.

In an eloquent message on his page, Obama praised Michael:

"What we remember today is the way he lived his extraordinary life. A life of meaning, purpose, and service. A life lived to make this country better for all of us. A life marked by finding great love in Sahar, and their young son Wali - who will hear from all of us how wonderful his dad was, and whom we'll help thrive and become a good man like him."

"I thought the president captured Michael's spirit and Michael's service to this country beautifully," said Sahar. "There are pieces of me that are broken and there are holes inside of me that are filled with the legacies he left, the life he built, the work that I will continue to do on his behalf, and the son I will raise."

Sahar and her son, just 16 months old, have received a groundswell of support from around the country. While their future is uncertain, she says the best way to honor her husband's memory, no matter your political leanings, is to vote next Tuesday.

"The last act my husband did in his life was to fill out, sign, and seal his ballot," said Sahar. "I mailed it the next day, I promised him."