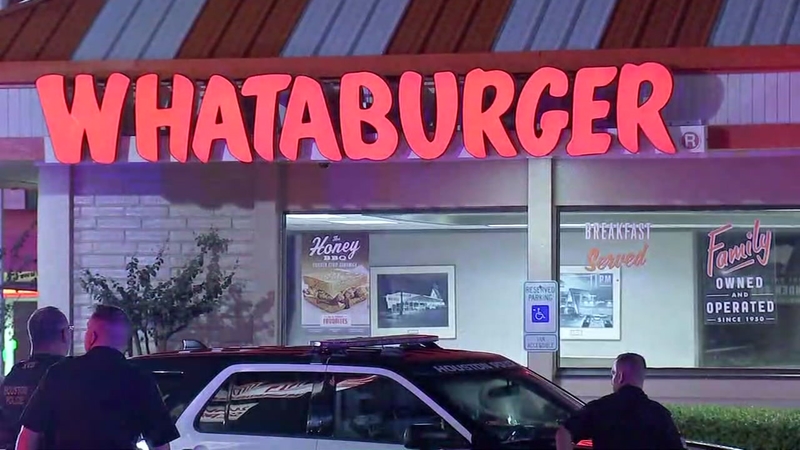 Police say the 10 customers inside the restaurant at 7629 West Bellfort got out quickly as a security guard shot and killed an armed robber.

"I was literally about to put my chip in to pay and my cousin's like, 'Go'," customer Jayvier Green said.

Witnesses told Eyewitness News that a man with a white bandana entered the restaurant around 1 a.m., and immediately opened fire.

"I see a dude in a white bandana pull out a gun like it's a movie or something, and start shooting behind the counter," Green recalled.

The restaurant's security guard spotted the intruder and returned fire, shooting the man four times in his right leg.

.@houstonpolice say a security guard shot and killed a man allegedly trying to rob this @Whataburger in SW Houston. 10 customers were inside but weren’t hurt. pic.twitter.com/2MMbWBtsCI

Police say the suspect continued to move behind the counter, not realizing he had been shot.

Minutes later, the suspect exited the restaurant and tried to flee in an unknown vehicle.

First responders found the man inside of the car and attempted CPR.

Officials say one of the bullets hit an artery, causing the man to bleed out.

No customers or employees were injured during the crossfire.

"We're saddened by the loss of life that occurred last night, but also grateful to the security officer who intervened to keep our customers and Family Members safe. Since this is an ongoing investigation, we ask that any questions related to this situation be directed to the Houston Police Department."