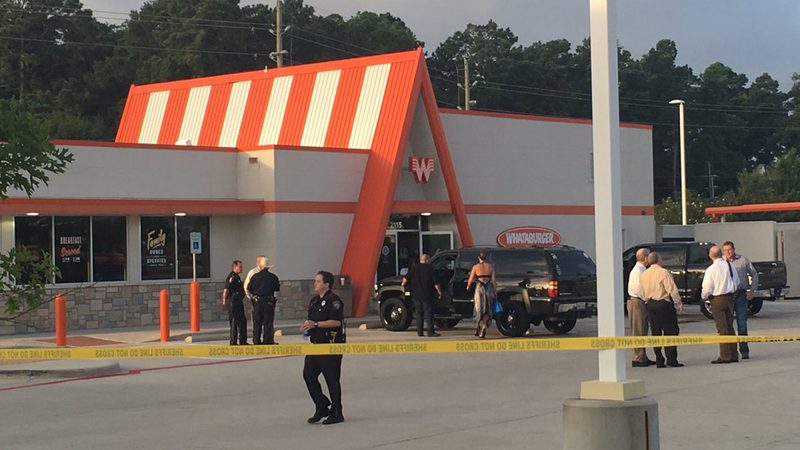 HARRIS COUNTY, TX (KTRK) -- Yellow police tape stayed up outside the Whataburger off FM 2920 in Spring for more than seven hours Monday morning, as investigators worked to retrace the steps of two suspected robbers and the deputies who stopped them.


"It's something I never really expected," said one man as he walked out of the restaurant.

The man didn't want to identify himself but says he was inside Whataburger with a friend when two men wearing masks and dark, hooded sweatshirts came in with guns.

"I know one of them was covered in the other had his hood on so I couldn't really see his face in the front," he said.

Detectives say around 1:30am, one robber went into the restaurant through a back door, the other went in through the front, walked straight to the cash register and started hitting the worker behind the counter.

"It was a very chaotic scene at the very beginning," said Deputy Thomas Gilliland with the Harris County Sheriff's Office.

The suspected robbers didn't know two of the diners were off-duty Harris County deputies, stopping for a late-night bite after a concert. Investigators say one of those deputies went behind the counter to try and stop the robber.

"He had told us to get out, get out, three times and the third time, he yelled at so we ran out of the restaurant," the man said.

"It could have turned much worse had the deputies not been there," Gilliland said.

After a brief struggle, the deputy fired his gun at least ten to twelve times, said detectives on scene.

The robber shot collapsed at the restaurant. He was eventually taken to the hospital condition, but we're told he's stable. The second robber got away. Investigators did find their guns on scene.

"It shows you crime can happen anywhere and does," Gilliland said.

As is policy, the two deputies involved will be put on administrative leave for four days. They'll be examined by a medical doctor and undergo a psych exam. They can return to work after being cleared.