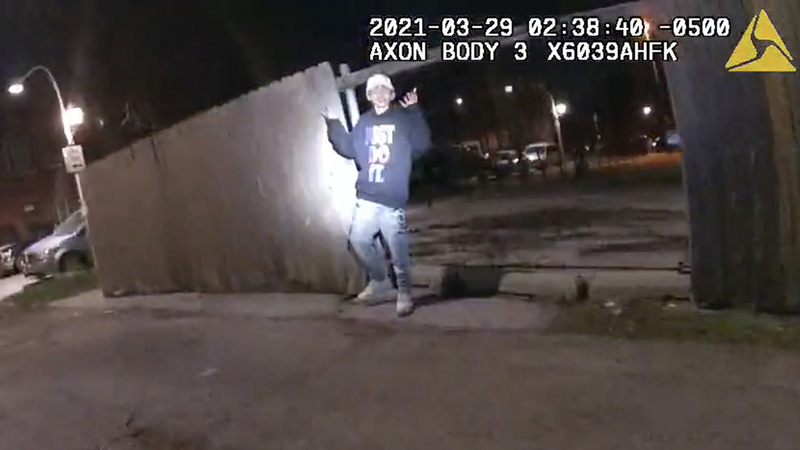 CHICAGO -- The fatal police shooting of 13-year-old Adam Toledo was captured on newly released body camera footage, along with witness and surveillance video.

Chicago Police Officer Eric Stillman has been identified in the original case incident report as the officer who fatally shot the teen on March 29 in the Little Village neighborhood. Toledo's death sparked protests among the community which is demanding change from the Chicago Police Department and Mayor Lori Lightfoot.

Lightfoot called the footage "excruciating" and "difficult to watch" in a press conference.

Here's what's known so far about the deadly shooting of Adam Toledo:

Just before 3 a.m. on March 29, police say the department's ShotSpotter technology, which can identify and alert officials of potential gunshots, detected a number of gunshots fired on the city's West Side. At least two 911 calls were also made in connection with the gunfire. Little Village, where Toledo lived and was killed, is a predominantly Latino community.

Nearby surveillance video shows 21-year-old Ruben Roman shooting at a passing vehicle with Toledo by his side, according to prosecutors in a bond hearing for Roman. Roman and Toledo then are said to have ducked into an alley, where officers found them shortly after.

Both ran, according to officials. In the footage, Stillman tackles Roman to the ground, then, while another officer arrests him, gets back up to chase Toledo.

Gloves worn by Roman tested positive for gunshot residue, according to Assistant State's Attorney James Murphy. He said seven shell casings recovered by officers matched the handgun Roman is previously seen using and that he says Toledo later appears to be carrying.

Roman now faces felony charges of reckless discharge of a firearm and unlawful use of a weapon by a felon, as well as child endangerment and violating probation, according to Murphy.

Thousands of people marched through the streets of the Logan Square neighborhood Friday to demand police reform after video was released that showed 13-year-old Adam Toledo's fatal shooting.

The police department released a video sequence that shows close-up video and freeze frames of the chase, in which Toledo appears to have a gun.

Stillman can be heard on video yelling, "Police! Stop. Stop right f---ing now." Toledo then stops at a break in the fence.

Stillman yells, "Hands -- show me your f---ing hands." Toledo then drops what seems to be a gun behind a fence, according to officials. As the officer yells, "Drop it!" Toledo put both of his hands up. In less than one second according to the prosecutors' account, Toledo allegedly tosses the gun behind the fence, and is shot by the officer.

Initial reports claimed that Toledo had a gun in his hands when he was shot, but the Cook County state's attorney's office said those claims are false.

Toledo then falls to his knees and lays on the ground, on the video.

Pronounced dead at the scene

In the footage, Stillman can be heard reporting that shots were fired by police and he called an ambulance to the scene. He made attempts to revive Toledo, telling him to "stay with him," but the teen was unresponsive. At one point, Stillman says he didn't feel a heartbeat and performs CPR on Toledo.

In a statement to ABC News, Stillman's attorney Tim Grace said "the officer was faced with a life-threatening and deadly force situation. All prior attempts to deescalate and gain compliance with all of the officers' lawful orders had failed."

Toledo did not have identification on him at the time of the shooting, according to officials. He was fingerprinted multiple times, but nothing came up. Missing persons reports were also checked.

Roman gave a fake name when questioned about Toledo's identity and denied knowing Toledo or firing any shots, according to prosecutors.

On March 31, detectives contacted Toledo's mother, Elizabeth, to tell her that her son matched the description of someone in the morgue. She identified her son that day. In a statement, the family expressed anger that officials waited two days before calling the family.

Who was Adam Toledo?

Adam Toledo was a seventh grader at Gary Elementary School, his family said in a statement.

"[He] enjoyed sports and was a good kid. He did not deserve to die the way he did," the statement said. "The Toledo Family will seek justice for this reprehensible crime."

In another statement, the Toledo family addressed "hurtful and false" mischaracterizations of Adam "as a lonely child of the street who had no one to turn to. This is simply not true. Adam was a loved and supported 13-year-old boy. He lived with his mother, his 90-year-old grandfather, and two of his siblings. His father was in his life. They all loved him very much. The Toledo family is a close-knit family. They look after each other."