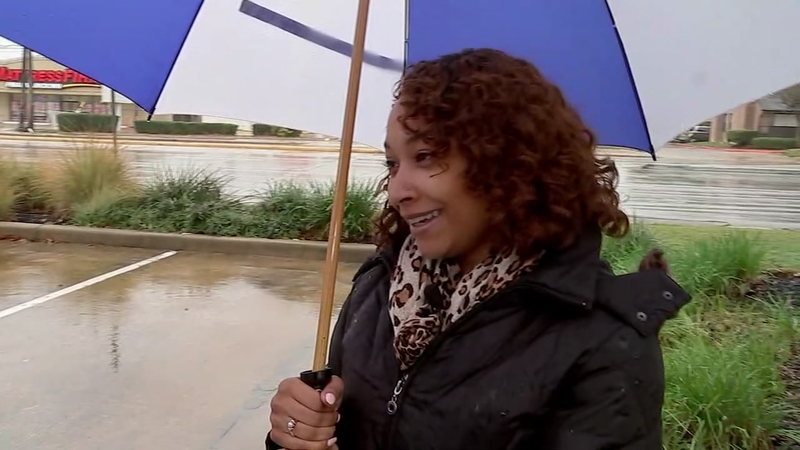 HOUSTON, Texas (KTRK) -- It was dramatic video we first brought you on ABC13 Wednesday afternoon, a road rage shooting on Westheimer Road that left an innocent bystander hurt.

Eyewitness News reporter Erica Simon was just feet away as this all unfolded, and now she's speaking with the EMT, credited with saving the victim in all of this. Some say Bre Jackson was in the right place at the right time. She calls it simply doing her job as she left Chipotle.

"I had just grabbed lunch and I heard gunshots as soon as I walked out of the door. I immediately went to my car to seek shelter and as I was driving out trying to exit, I see the woman who was injured on her knees and her holding her face and screaming," she explained.

It's a scenario no one thought they'd have to encounter. At the time, Eyewitness News reporter Erica Simon was on the ground taking cover. Once it was safe to get up, she saw the victim and Jackson.

"She was right there on the ground with a few people around her and I could see she had blood all over her clothing. So I just parked my car right there in the entrance of the HEB and I ran out to her, " said Jackson. "She was saying that she was in pain, and I was just telling her you know 'I understand you're in pain but try to remain calm. EMS will be here soon.' Definitely with my training, it's easier to remain calm in situations thankfully."

Houston Police Department says road rage situations like this are avoidable. Everyone just has to look for de-escalation tactics and if they have to, call the police.

"Being proactive is the best defense I would say, in not being able to have conflict with another motorist," Commander Kenneth Campbell said.

As for Jackson, she's going to go back to her job and normal life, but now, with a lot more recognition.

"A lot of people are calling you a hero," Eyewitness News reporter Erica Simon said with a smile.

"Any EMS, any trained professional would have done the same in the situation. I did nothing special at all," Jackson replied.

The victim's brother tells us a bullet grazed her ear, face and got lodged in her cheek, but the good news is, she will recover. As for the two drivers involved in the shootout, HPD says the case is going to be sent to a Harris County grand jury to determine who did what.