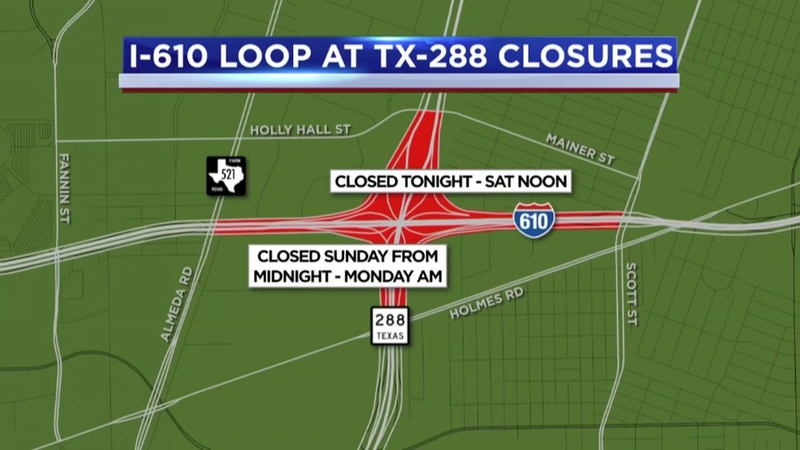 HOUSTON, Texas (KTRK) -- The traffic nightmare is real this weekend and in the following weeks ahead in southeast Houston.

If you're traveling along SH-288 over the next three weeks, you may want to plan for some major closures.

On Monday, Aug. 13 the direct connector ramps, which take drivers from IH-610 eastbound to SH-288 northbound and IH-610 westbound to SH-288 southbound, were open to drivers.
Now, workers must take the old ramps down. In order to achieve that, some major closures will be happening.

Workers will shut down both SH-288 and the 610 South Loop for three weekends.

All lanes of SH-288 northbound and southbound will be closed from Holly Hall to IH-610.

The SH-288 northbound direct connector to IH-610 westbound will be closed.

The closures will last three weekends starting on Friday, Aug. 17 to Sept. 24.

The closures starting Friday, Aug. 17 will begin at 9 p.m. until Saturday at 12 p.m. Lanes will reopen to accommodate extra traffic around the Texans preseason game, then shut down again Sunday at midnight until Monday at 5 a.m.

The remaining weekend closures will begin on Fridays at 9 p.m. and end on Mondays at 5 a.m.

All dates are subject to change, and construction can be postponed due to inclement weather.

The interchange of SH-225 and the East Beltway will see major closures.

Starting at 10 p.m. on Friday, SH-225 closes for construction in both directions, and the East Beltway will close all northbound mainlanes at the interchange.

The weekend closures are part of the project to construct a new northbound bridge over 225 around Jacintoport.

Crews are installing bridge beams this weekend. The east freeway is a good alternate route for the weekend, and the interchange should reopen by Monday at 5 a.m.

There is another major closure on Sam Houston Tollway, on the northside, which starts this weekend as well but is scheduled to last through the middle of the week.

Starting at 9 p.m. on Friday, the northbound Clay Road ramp closes, with reopening scheduled for Wednesday, Aug. 22 at 5 p.m.

The closure will allow for the removal of a center barrier at the Clay Road exit ramp, HCTRA says, improving traffic flow at that location.