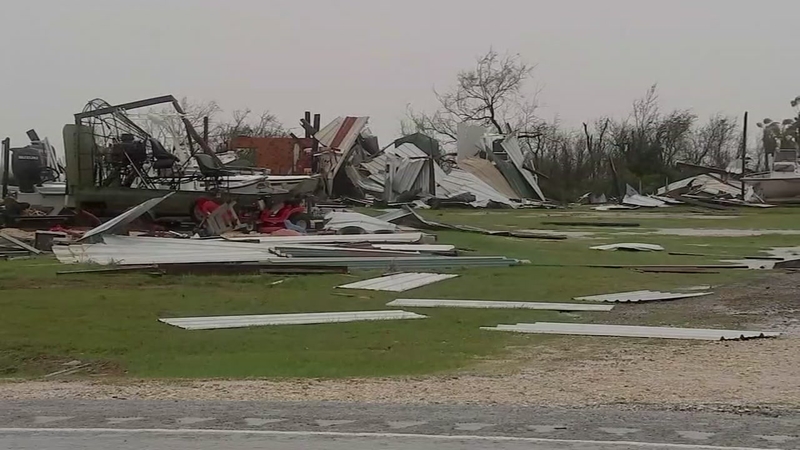 ROCKPORT, Texas (KTRK) -- A Texas judge says there is one confirmed death from Harvey in the coastal city of Rockport.

The Austin American-Statesman reported Saturday that Aransas County Judge C.H. "Burt" Mills Jr. also says 12 to 14 people were injured by Harvey, which came ashore Friday night as a Category 4 hurricane but has since been downgraded to a tropical storm.

Harvey delivered a direct blow to Rockport, a city of about 10,000 people.

City leaders said at a news conference that their coastal community has been turned into a debris field and that the storm damaged a school, the library and other public buildings.

Charles "C.J." Wax, the mayor of Rockport, a coastal city of about 10,000 that was directly in the storm's path, said his community took a blow "right on the nose" that left "widespread devastation," including homes, businesses and schools that were heavily damaged. Some structures were destroyed.
He says emergency response system for the city has been hampered by the loss of cellphone service and other forms of communication.

Rockport City Manager Kevin Carruth said by telephone that he had heard reports of a tree falling into a mobile home and roofs collapsing on houses. The city, about 31 miles northeast of Corpus Christi, had peak wind surges of more than 125 mph, according to the National Weather Service.

Carruth told KIII-TV that Rockport's historic downtown area has also seen heavy damage. He says there are reports of damage to vehicles and roofs.

Harvey is lashing a wide swath of southeast Texas with strong winds and torrential rain as the fiercest hurricane to hit the U.S. in more than a decade.
EMBED More News Videos

Severe damage has been reported at Rockport High School and the courthouse.

On Friday, Rockport Mayor Pro Tem Patrick Rios offered ominous advice, telling the station that people who chose not to evacuate should mark their arm with a Sharpie pen, implying that the marks would make it easier for rescuers to identify them.