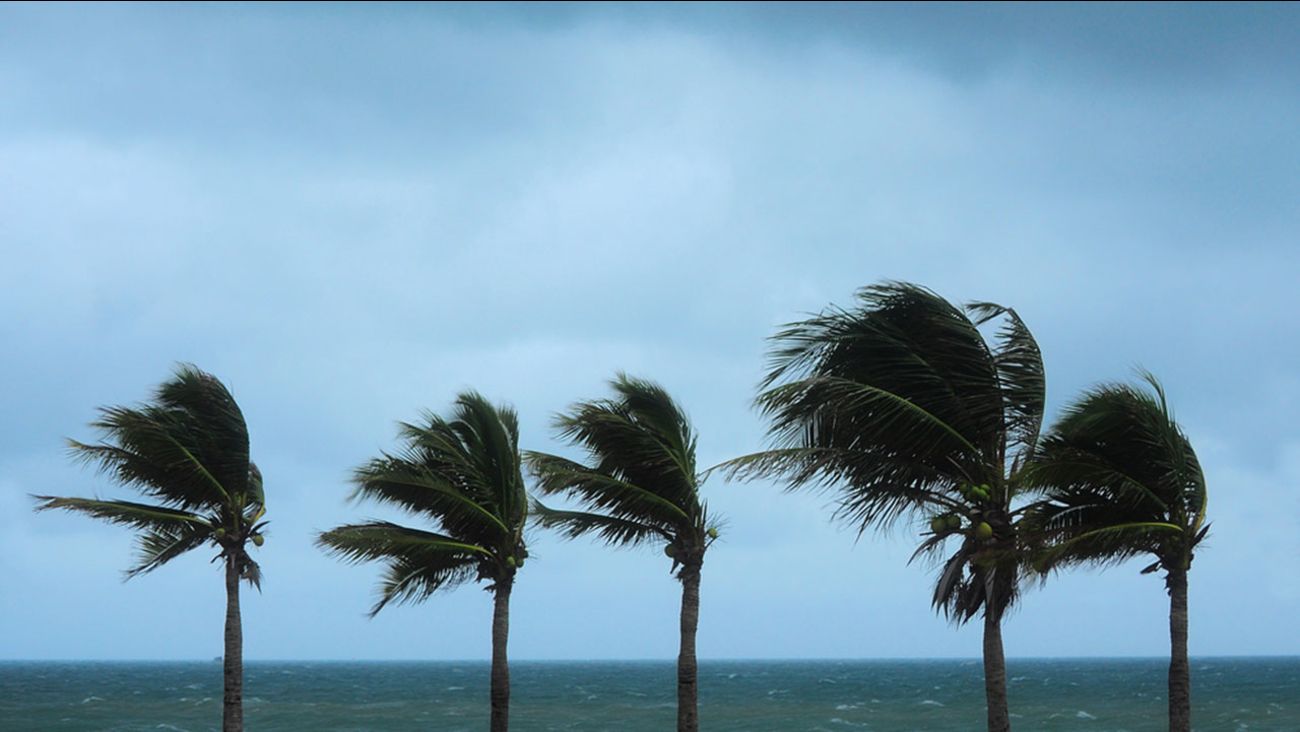 Palm trees bend under the force of the wind in this file photo of a hurricane. (Shutterstock)

The National Hurricane Center says an area of low pressure between Bermuda and the Bahamas had a high chance of brewing into something bigger Friday or Saturday.

Hurricane hunter aircraft will investigate the disturbance Friday, and communities along the coasts of Georgia and the Carolinas should monitor its development, said NOAA Administrator Kathryn Sullivan.

While they can't predict whether any storm will strike the U.S., and more tropical storms are expected than in the last three years, NOAA officials said significant variables are at play.

El Nino is the natural warming of parts of the Pacific Ocean that changes weather worldwide. That tends to reduce hurricane activity in the Atlantic, while La Nina tends to increase it.

Each era can last 25 to 40 years, and it might take years to determine whether the transition has happened, Bell said.

The last transition to a less active hurricane era happened in the 1970s, without the data and computer models that forecasters have now. "We're watching it for the first time with very new eyes," Sullivan said.

The 2015 season was slightly below average with 11 named storms, including two tropical storms that made landfall and caused flooding in South Carolina and Texas. Hurricane Joaquin, one of two storms to reach major hurricane strength, killed all 33 mariners aboard a cargo ship that sank off the Bahamas in October.

During U.S. Coast Guard investigative hearings this month into the sinking of the El Faro, one federal investigator characterized the disaster as "a colossal failure" of management.

Initial forecasts for Joaquin also were wildly inaccurate. Sullivan said NOAA is on track to meet storm track and intensity forecast improvement goals, and a new weather satellite launching this fall will produce much sharper images of hurricanes and other severe weather.

The last major hurricane to strike the U.S. mainland was Hurricane Wilma, which cut across Florida in 2005. Wind speeds, not damage estimates, determine whether a hurricane is classified as "major" - that's Category 3 and up on the hurricane wind scale .

Since 2005, the population in the 185 coastline counties most threatened by hurricanes has grown 8.7 percent to 59.2 million people, according to U.S. Census estimates. Overall, 143.6 million people - 44.7 percent of the U.S. population - from Maine to Texas could be living in harm's way.

Other Census figures hint at the potential financial risks throughout those states: 60.1 million housing units and 3.3 million business establishments with 52.3 million paid workers.

Ferocious storm winds aren't the deadliest threat. According to the National Hurricane Center in Miami, storm surge and rainfall flooding combine for three-quarters of all U.S. deaths from hurricanes, tropical storms or tropical depressions.

In the Bahamas, Joaquin caused over $60 million in damage, according to the hurricane center. The islands reported widespread flooding that contaminated drinking water, cut off an airport and swamped a local fishing fleet.

Even "minor" storms can leave misery behind. After Tropical Storm Erika swept through the Caribbean last year, damage estimates on the island of Dominica ranged up to $500 million for homes, roads, bridges and infrastructure, and Puerto Rico reported $17.4 million in agricultural losses for plantains, bananas and coffee.

The Northeast was wracked by catastrophic flooding, first from Hurricane Irene in 2011 and again from Superstorm Sandy in 2012. Damage estimates tallied in the tens of billions of dollars.

Due to the financial hardships left in Sandy's wake, the Federal Emergency Management Agency said Monday that it's overhauling its appeals process for flood insurance claims with more transparency and oversight. Homeowners will be able to take disputes directly to FEMA instead of first going through the insurance companies they're fighting.

Rising sea levels are expected to increase the vulnerability of coastal communities to flooding from tropical systems. Recent research indicates climate change is likely to make hurricanes more intense in the future.

But the hurricanes that do form could grow more intense because ocean temperatures will be higher, Nolan says. Warm ocean waters feed hurricanes like fuel in an engine.

"The ones that do occur could be a little bit stronger," Nolan says, "but the changes over the next 10, 20, 30 years would be very small, almost undetectable."