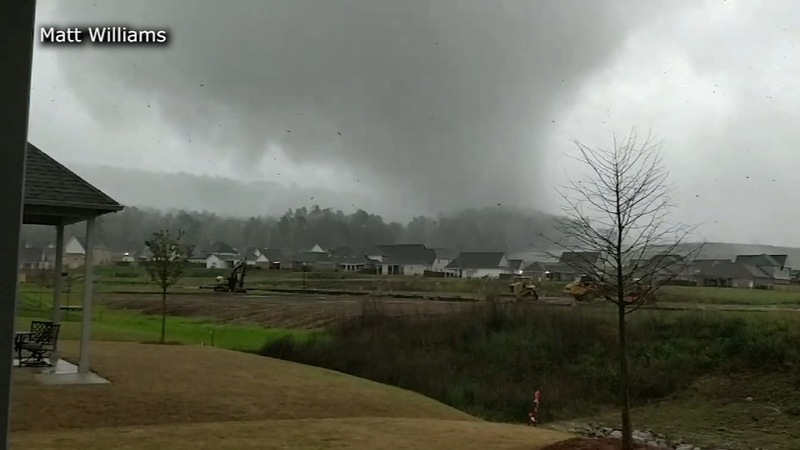 BIRMINGHAM, Alabama -- A meteorologist covering the deadly tornadoes that pummeled Alabama on Thursday suffered damage to his own home.

James Spann, the chief meteorologist for ABC33/40 in Birmingham, took to Facebook and said a tornado damaged his home.

"My wife was home when it hit, but she got the warning, was in our in-home shelter, and is fine," he wrote. "While we lost many trees, the home is intact and we will not have to "rebuild."

Had a scare today. As I often say, tornadoes happen to real people, at a real place, at a real time. pic.twitter.com/uoGxcKAJZE

James, you are an inspiration and role model to us all. You took care of your wife on live TV to make sure she was getting into the shelter, you stepped off camera to make sure she was okay after it passed, AND then you got back on for hours to inform your community. Well done.

Last night we talked about how bad this set-up would be. Just now @spann had to step off camera while covering the tornado that went over his home, damaged his neighborhood — his family is safe thank goodness. You have to watch their coverage: https://t.co/hHPLucwyu0 pic.twitter.com/nbOFk40U3P

A series of tornadoes killed five and left thousands without power. Multiple people were reported injured in Calhoun County and in hard-hit Shelby County, near Birmingham, where homes were flattened. Storm warnings stretched from eastern Mississippi, across Alabama and into western Georgia - and northward through much of Tennessee and Kentucky.

Search and rescue efforts were complicated by strong weather that continued to rake across the region. The Calhoun County emergency management agency opened shelters for the displaced and warned that storms were expected to continue into the night.

"We have been told to be prepared for another round of storms," said Maj. Clay Hammac of the Shelby County sheriff's department.

First lady Jill Biden postponed a planned trip to Birmingham and Jasper, Alabama, because of the severe weather, her office said in a news release.

More than 35,000 customers were without power in Alabama as of Thursday evening. Alabama Gov. Kay Ivey issued an emergency declaration for 46 counties as the severe weather approached, and officials opened shelters in and around Birmingham.