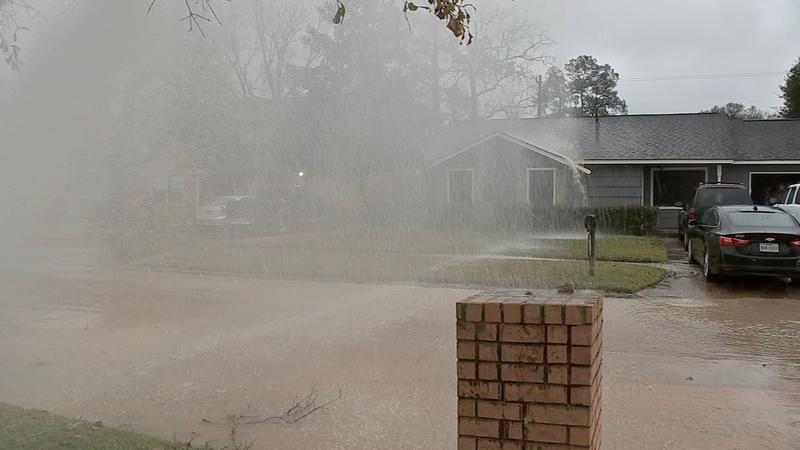 HOUSTON, Texas (KTRK) -- After a large water main break flooded a woman's home just as an arctic front hit the area, the city of Houston says it will pay to fix the damage.

ABC13 got a call into the newsroom Thursday morning when Angela Reed said water was shooting up over her house from a water main break in the East Little York neighborhood.

"Well at first I called the city. I heard the water this morning and I figured, 'It's raining.' I looked in the backyard, 'It's not raining back there,'" Reed said. "So I looked out and saw the gusher coming over, in the house. I mean, hitting the house, hitting the house."

Reed said what started as a leak in the 6210 block of Moss Oaks Drive erupted into a geyser of water around 5 a.m. Thursday.

A spokesperson with Houston public works told ABC13 that the city does not typically help pay for home repairs, unless they were directly caused by a worker.

Water has been pummeling Angela Reed's home since 5 a.m. Now, her house is flooded as the city braces for a freeze.

At the home, ABC13 reporter Courtney Fischer got an inside look at the flooding. Courtney was live at Reed's home as water slammed the roof in the Eyewitness News at 7 a.m. streaming newscast.

"I called them back. 'OK, my house is flooding now,'" Reed said.


Reed said the city said someone would be sent at 8 a.m.
"But, my house is flooding. I need someone to come turn the water off," she told the city.

Edward McFarland, the neighbor across the street where the water main break started, said he called public works on Monday to report what was, at that time, a small leak.

He said the city sent a crew to check his meters, but nothing was done about the leak. He said he called them again on Wednesday to let them know it was still leaking.

The city confirmed to ABC13 that crews checked the leak on Monday, but "decided it was not considered an emergency leak."


Inside Reed's home, water soaked the carpet in two bedrooms. Water pummeled the roof for hours.

According to Houston public works, the city does not typically pay for damages to homes unless they were directly caused by a worker.

But by Thursday afternoon, after ABC13's report, the city said that it would pay to fix the damage. In fact, crews were there ripping up the damaged carpet.

Update! @HouPublicWorks working to get into about when water will be turned off. Spokesperson says they’re aware of the issue. pic.twitter.com/bWpqu0SHlw

Public works crews began repairing the break Friday morning, adding that neighbors shouldn't be without water but low pressure may be in store.