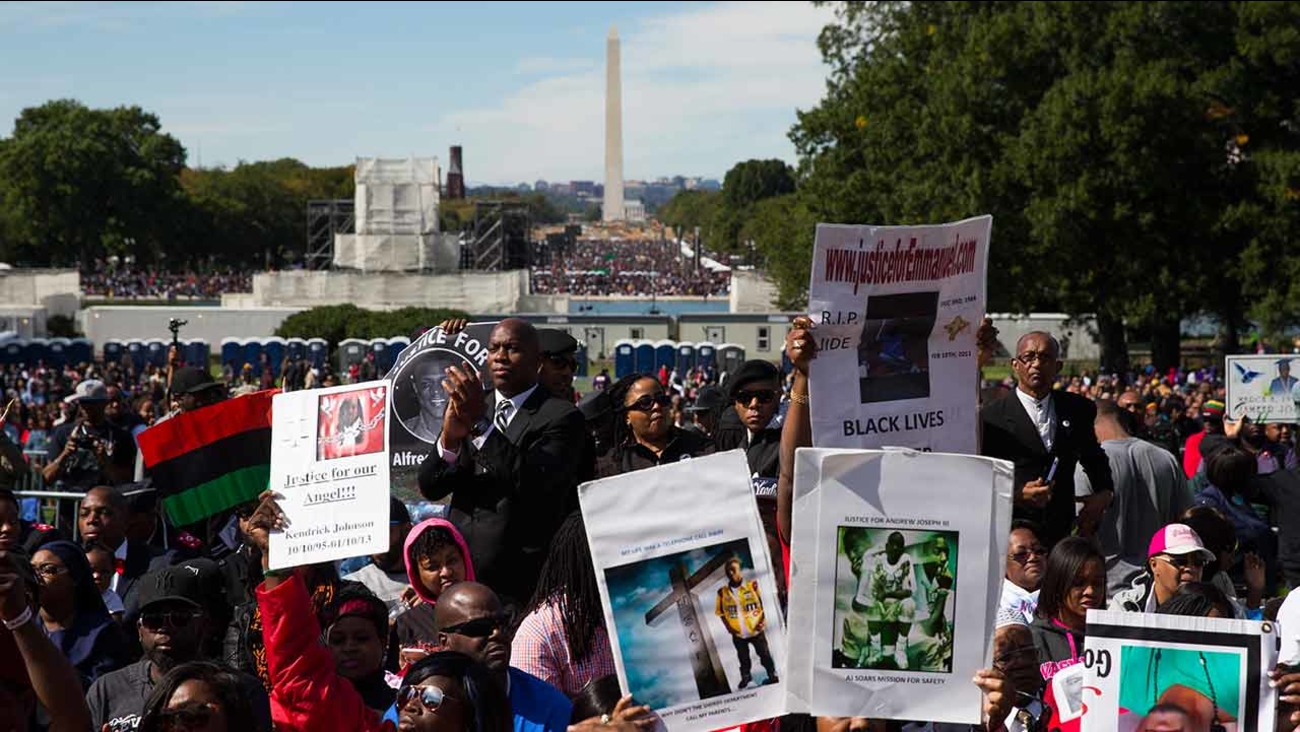 People cheer during a rally to mark the 20th anniversary of the Million Man March, on Capitol Hill, on Oct. 10, 2015, in Washington, D.C. (AP Photo/Evan Vucci)

WASHINGTON -- Thousands of Americans joyously returned to the National Mall on Saturday for the 20th anniversary of the Million Man March, calling for changes in policing and in black communities amid an atmosphere almost like a family reunion.

Waving flags, carrying signs and listening to speeches and songs, people mingled as they wove their way through security barricades and around loudspeakers and souvenir vendors at the U.S. Capitol and down the Mall on a sunny, breezy day.

For some, it was a return to Washington after the Million Man March on Oct. 16, 1995, and a chance to expose their children to the same positive experience the first march represented to them.

"This is a very special moment for me. Twenty years ago, I was by myself," said Joey Davis, 47, of Detroit, who was setting up chairs for his family near the Capitol's reflecting pool. "And 20 years later, I come back with my wife and five children. And so I like to think that over the last 20 years I've been doing my part in keeping the promise of the spirit of the original Million Man March."

Nation of Islam leader Louis Farrakhan, who spearheaded the original march, called the anniversary gathering the "Justice or Else" march. Many speakers asked the crowd to chant that slogan during the day.

Farrakhan, in a wide-ranging speech that lasted for more than 2 hours, called for more responsibility in the black community for inner-city killings and for the government to investigate recent high-profile killings of unarmed African-American men and women.

"There must come a time when we say enough is enough," the 82-year-old Farrakhan said.

Attention has been focused on the deaths of unarmed black men since the shootings of 17-year-old Trayvon Martin in 2012 in Florida and 18-year-old Michael Brown in 2014 in Ferguson, Missouri. Deaths of unarmed black males at the hands of law enforcement officers have inspired protests under the "Black Lives Matter" moniker around the country.

Members of their families and the family of Sandra Bland, an African-American woman found hanged in a Texas jail after a traffic stop, spoke from the main stage.

The original march brought hundreds of thousands to Washington to pledge to improve their lives, their families and their communities. Women, whites and other minorities were not invited to the original march, but organizers welcomed all on Saturday.

President Barack Obama, who attended the first Million Man March, was in California on Saturday.

Saturday's march brought out young and old, including some veterans of the 1963 March on Washington. Nate Smith of Oakland, California, who was on the Mall for Martin Luther King's "I Have A Dream" speech and the 1995 Million Man March, returned once again for Saturday's proceedings.

"It's something that I need to do," the 70-year-old man said. "It's like a pilgrimage for me, and something I think all black people need to do."

Rev. Jamal Bryant of the Empowerment Temple AME Church in Baltimore, who helped organize the anniversary march, estimated there were almost 1 million attendees Saturday. Farrakhan refused to guess how many people filled the Mall from the Capitol to the Lincoln Memorial.

Life has improved in some ways for African-American men since the original march, but not in others. For example:

-The unemployment rate for African-American men in October 1995 was 8.1 percent, according to the Bureau of Labor Statistics. In September 2015 it was 8.9 percent.

-Law enforcement agencies made 3.5 million arrests of blacks in 1994, which was 30.9 percent of all arrests, the FBI said. (By comparison, they made 7.6 million arrests of whites that year, which was 66 percent of all arrests.) By 2013, the latest available data, African-American arrests had decreased to 2.5 million, 28 percent of all arrests.
Related topics:
washingtonu.s. & world
Copyright © 2021 by The Associated Press. All Rights Reserved.
U.S. & WORLD
Fashion designer Virgil Abloh dies at 41
Who is the real Ghislaine Maxwell: Epstein enabler or pawn?
For cop who shot Daunte Wright, will 'wrong gun' plea work?
Archeologists find Peruvian mummy at least 800 years old
TOP STORIES
6 dead, including 2 teens, in span of 10 hours on Houston roads
11-year-old girl fatally shot by father in E. Texas hunting trip
Man stabbed to death during fight outside north Houston restaurant
Innocent driver and passenger killed in crash with DWI suspect
2 people shot outside Texas City's Mainland City Centre
Fashion designer Virgil Abloh dies at 41
Texans fall to the Jets, losing the momentum of last week's big win
Show More
Cloudy Sunday with temps in the 60s
Supreme Court set to take up all-or-nothing abortion fight
Archeologists find Peruvian mummy at least 800 years old
Driver killed in fiery crash along I-69 was speeding, police say
Rare mammoth tusk found at bottom of ocean off CA coast
More TOP STORIES News